2 – The Final Empire: Its Physical Geography

2-A. Dual Nature of the Empire
2-B. Economic Superpower: the New Beast
2-C. Who Are the Two Superpowers of the End?
2-D. Is Modern Europe the “Beast from the Earth”
2-E. Eighth Head
2-F. Who Are the “Ten Horns”?

This idea about the rise of two Antichrists, or two Beasts, in the End Time ties in well with the riddle of Revelation 17:11 – “And the beast that was, and is not, is himself also the eighth, and is of the seven.” The “seven” here refers to the “seven heads” that were attached to the “beast coming out of the sea” in the Revelation 13 and 17 passages.  These “heads” are usually understood to be symbolic of the seven political-military empires who will have ruled over Israel during the course of history: Egypt, Assyria, Babylon, Persia, Greece, Rome, and the final Antichrist empire.

The description in Revelation 13 of this “first beast” (from the sea) is actually a combined picture of all the “sea-beasts” that once ruled Israel,some of whom were previously mentioned in a vision given about 600 years earlier to the prophet Daniel and depicted there as separate beasts. (Daniel 7)

As the passage continues in Revelation 17, the guiding angel takes over and starts talking to John the apostle about “the beast that was, and is not”. (17:11) This peculiar phrase was referring to the seven-headed, ten-horned beast that had astonished John earlier (in Revelation 13:3) and is mentioned again here in chapter 17; but more specifically, the angel is drawing attention to the End Time “is-not” aspect of that Beast (its seventh head) which had not arrived on the world scene in John’s day when these Revelation chapters were written.

Back in Revelation 13, in addition to the “beast from the sea”, that chapter also depicted another “beast” – of a different type, one who came “up out of the earth”. Numerically, in the Daniel-Revelation Books’ progression of various “beasts”, this one should be categorized then as the eighth “beast” (or eighth “head”) to come along in world history – an economic-religious empire, portrayed as a mysterious “eighth head” attached to the seven-headed “first beast” of Revelation 13. 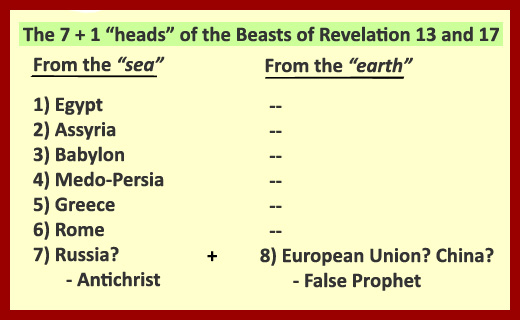 Since this new Beast is quite different from the other seven “heads/mountains/kings” of verses 9 and 10 in Revelation 17, he isn’t categorized with them. But even though he’s different, he is still lumped in with them, or at least with the seventh head: “Even he (the seventh) is the eighth.” In other words, this last empire of man, the seventh one, who “has not yet come. . . the beast that was and is not”, on closer inspection will be found to have another “head”, and it is these two “heads” who work and rule together over the earth in its final hours of history.

Interestingly, the angel also states in this verse 11, “the eighth. . . is going to perdition.” Or in the NLT version, “the eighth king. . . he, too, is headed for destruction.” In verse 8 the angel had said the same about the 7th king/beast: “the beast that you saw was, and is not, and will. . .  go to perdition.” Then further ahead in Revelation 19:20, we read that at the coming of Christ during the Battle of Armageddon, “the beast was captured, and with him the false prophet. . . These two were cast alive into the lake of fire burning with brimstone.”

Both 7th and 8th Beasts/kings are headed for perdition in chapter 17, and then later in chapter 19, the same two (called Beast and False Prophet this time) are again pictured going into perdition (described as getting tossed into the lake of fire). With this correlation, it’s easier to see how the Sea-Beast (Antichrist) and the Earth-Beast (False Prophet) can be identified with the 7th and 8th “heads” (of Revelation 17:11).

Could this be the answer then to the riddle of Revelation 17:11 of how on earth does the seventh head manage also to be the eighth? That verse states that “the eighth. . . is of the seven,” meaning that he does not belong to some future time; he belongs to our present Age. So the only question is, how can the seventh also be the eighth? We could ask a similar question about the “feet” in the Daniel 2 “image”: Why do the iron and clay materials in them “mix”? Well, it must have something to do with a combining of the two separate kingdoms’ resources or rule, or something of that nature. (By the way, this question about the significance of the “iron and clay” in the Daniel 2 “image” will be explored more thoroughly later on.)

So the single Antichrist kingdom is actually made up of two parallel empires. They expand into each other’s territory, as well as other parts of the world. They do more than co-exist, but each empire, in a sense, possesses the other. And this could even mean a union of their territories politically.

To illustrate, consider the influence of a nation’s capital city: Even though it is located in one particular spot, the influence of the government is not limited to that city or state, but extends throughout the entire country. And in many nations, there exist two centers of power: One city is the political capital, while another city has become the unofficial economic capital whose influence also spreads throughout the nation. But even though there may be two centers of power, they’re still part of the same nation.

Likewise, the False Prophet and Antichrist will each have their respective spheres of influence which will not be confined to their borders but will spread into each other’s kingdoms and throughout much of the earth. And at the same time they will be working together as one kingdom.

To summarize, the earth-Beast is the eighth Beast who, in Revelation 13, is mentioned after the seventh, the Antichrist. In Revelation 13, they are portrayed as separate, yet simultaneous, kingdoms who ally together; and Revelation 17:11 merely restates this fact more concisely. (The verse also suggests that the Antichrist “beast” will be regarded as the official “head” of this combined empire.)

It’s interesting how different parts of the Sacred Book tie together and help us get a complete picture: In Daniel 2 the ”iron mixed with clay” and the “feet” give us a picture of a dual empire in the Endtime whose regimes merge together. Then later, the description of the Revelation 13 “beasts” (the seven-headed one from the sea and the earth-Beast) fills in many details about these two kingdoms. Significantly, it shows that, although separate kingdoms, they do interact quite a bit, which seems to reflect the portrayal in Daniel’s “image” vision of “iron and clay” mixing together. We can also understand the identity of the mysterious “eighth beast/head” in Revelation 17:11 that he is the second of the two Beasts from chapter 13 – the “beast coming up out of the earth”. And the merging of the seventh and eighth Beasts in Revelation 17:11 helps us to understand that the two separate Beasts of Revelation 13 (or the two separate feet of the “image”) are, for all intents and purposes, one empire, similar to how the “iron and clay” in Daniel 2 are “mixed” and thereby create one empire.

The following article offers a tantalizing glimpse into the future, a sort of forecast showing how the present political situation may be heading towards a unification or alliance of the Russian and European superpowers (who, as proposed in this study, would be the 7th and 8th heads of the Beast):

Russian Prime Minister Vladimir Putin would like to see a free trade agreement between the European Union and Russia. In a Thursday editorial for a German newspaper, he describes his vision of “a unified continental market with a capacity worth trillions of euros.”
No more tariffs. No more visas. Vastly more economic cooperation between Russia and the European Union. That’s the vision presented by Russian Prime Minister Vladimir Putin in an editorial contribution to the German daily Süddeutsche Zeitung on Thursday.
“We propose the creation of a harmonious economic community stretching from Lisbon to Vladivostok,” Putin writes. “In the future, we could even consider a free trade zone or even more advanced forms of economic integration. The result would be a unified continental market with a capacity worth trillions of euros.”
The proposal comes as Putin travels to Germany on Thursday for a two-day visit, including a Friday meeting with German Chancellor Angela Merkel. On Wednesday, Russia and the EU reached an important agreement on the elimination of tariffs on raw materials such as wood. The deal was an important prerequisite for the EU dropping its opposition to Russian membership in the World Trade Organization.
Moscow is hoping to become a member in 2011.
Putin, though, as his Thursday proposal makes clear, envisions more. “The current state of cooperation between Russia and the EU is not consistent with the challenges that we face,” he writes. “To transform the situation, we need to take advantage of the advantages which already exist and the possibilities for progress in the EU and Russia.”
In addition to the establishment of closer economic ties between the EU and Russia, Putin also envisions close cooperation on industrial policy. “In my view, we need to address the question as to how we can trigger a new wave of industrialization across the European continent.” In particular, Putin mentions ship, automobile and airplane construction, space technology, pharmaceuticals and medical technology and nuclear energy.
Putin also proposes much closer collaboration when it comes to energy. “In recent years, cooperation on energy issues between Russia and the EU has attracted much attention and, to be honest, has been much too politicized.” He would like to see European and Russian firms working together “from exploration and exploitation of energy resources all the way to the delivery to consumers.”
“The renewed principles of our cooperation could be anchored in the partnership agreement between the EU and Russia, an accord which is currently under negotiation. We should approach this treaty from a strategic perspective. We should try to think 20, 30, even 50 years into the future.”

(Note: Because of recent events in Ukraine, Euro-Russian relations have suffered a major setback since the above was written. Will this scuttle Putin’s vision of future unification with the EU? Perhaps, but time often has a way of healing old wounds, especially in the fluid domain of politics where alliances often shift unexpectedly in response to the demands of nations’ self-interest.)

Continue to 2F: Who Are the “Ten Horns”?

Origin of the Natural World: Creation? Divine Intervention? or Both!