V 1    Now about that time Herod the king stretched out his hand to harass some from the church.

“Herod the king.” Herod Agrippa I ruled during a time when there was no Roman governor. His grandfather, Herod the Great, was the one who met the Wise Men and slaughtered the infants of Bethlehem. His uncle, Herod Antipas, beheaded John the Baptist and was the one to whom Jesus was sent by Pilate prior to His crucifixion. 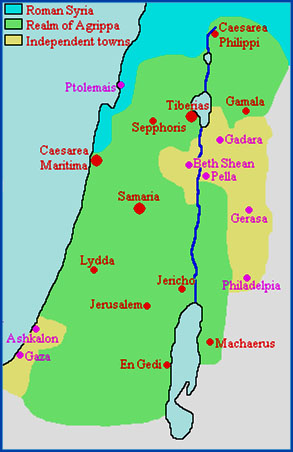 Herod Agrippa was ruler over northern Palestine to which Judea and Samaria were added in 41 A.D. His relationship with Rome was somewhat shaky because of financial debts, so he tried to curry favor with the Jews by persecuting Christians. He had to keep the Jews happy lest they cause disturbances, which in the eyes of the Romans would reflect badly on his administration.

V 2    Then he killed James the brother of John with the sword.

“James.” First Apostle to be martyred; he was with Peter and his brother John on the mount where Jesus was transfigured. “With the sword.” This was the method of execution used for those who had been accused of leading people to follow false gods. (Deuteronomy 13:12-15)

V 3    And because he saw that it pleased the Jews, he proceeded further to seize Peter also. Now it was during the Days of Unleavened Bread.

“He saw it pleased the Jews.” The responsibility for this heinous deed rested, not just with Herod, but also the unbelieving Jews, who were pressuring Herod to commit these crimes.

V 4    So when he had arrested him, he put him in prison, and delivered him to four squads of soldiers to keep him, intending to bring him before the people after Passover.

“Four squads.” Each “squad”, or quaternion, contained four soldiers and rotated the watch over Peter. Two guards were chained to Peter, and the other two stood guard outside the cell. Perhaps the Jews, remembering still the Apostles’ escape from jail a few years earlier (Acts 5), had warned Herod to guard Peter very closely.

“After Passover.” Peter’s execution was delayed to avoid desecrating this sacred event of the Jewish people.

V 5    Peter was therefore kept in prison, but constant prayer was offered to God for him by the church.

“Constant prayer was offered.” Desperate prayer can bring awesome results as the church was soon to find out.

V 6-8 And when Herod was about to bring him out, that night Peter was sleeping, bound with two chains between two soldiers; and the guards before the door were keeping the prison.
Now behold, an angel of the Lord stood by him, and a light shone in the prison; and he struck Peter on the side and raised him up, saying, “Arise quickly!” And his chains fell off his hands.
Then the angel said to him, “Gird yourself and tie on your sandals”; and so he did. And he said to him, “Put on your garment and follow me.”

“His chains fell off his hands.” Another miraculous escape carried out by the “angel of the Lord” as in Acts 5:19. 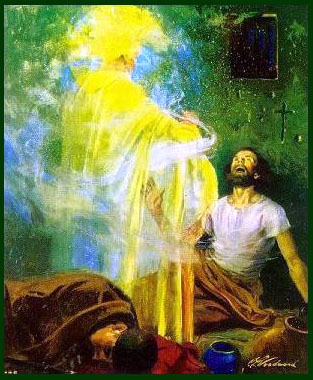 V 9    So he went out and followed him, and did not know that what was done by the angel was real, but thought he was seeing a vision.

“Thought he was seeing a vision.” This miraculous escape was such an overwhelming, intense working of the power of Heaven that to earth-bound Peter the whole thing seemed to have an unearthly, dream-like quality; as a result during the entire time he thought it was nothing more than a vision. 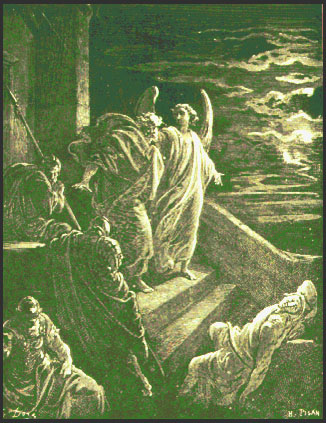 V 10  When they were past the first and the second guard posts, they came to the iron gate that leads to the city, which opened to them of its own accord; and they went out and went down one street, and immediately the angel departed from him.

“The angel departed from him.” But not until after he had taken Peter “past the first and second guard posts”, then the “iron gate. . . which opened to them of its own accord”, and finally “down one street”. The angel had done a fine job of masterminding this second prison break, making sure Peter was well out of harm’s way before departing from him.

V 11  And when Peter had come to himself, he said, “Now I know for certain that the Lord has sent His angel, and has delivered me from the hand of Herod and from all the expectation of the Jewish people.”

“When Peter had come to himself.” It must have been quite a shock for Peter, as he descended from the heavenly plane to the earthly plane, as if awaking from a dream, to find himself outside in the street, with the experience of the prison escape being little more to him than a distant memory or dream. For awhile he must have felt quite disoriented, wondering “How did I get here?”

This was certainly an intriguing episode about the intersection of two worlds – the supernatural with the natural. The supernatural is the real world, but to our minds it appears distant and unreal, as we can see by Peter’s bewildered reaction to this experience. Nevertheless, the more we can learn to allow the supernatural realm to influence our lives, the more will be enhanced our service to the Lord.

V 12  So, when he had considered this, he came to the house of Mary, the mother of John whose surname was Mark, where many were gathered together praying.

“The house of Mary, the mother of John. . . Mark.” John Mark was the cousin of Barnabas (Colossians 4:10), which means this Mary was Barnabas’ aunt. John Mark wrote the Gospel of Mark, probably with the help of Peter who apparently was his father, or like a father to him. (1Peter 5:13)

V 13-15 And as Peter knocked at the door of the gate, a girl named Rhoda came to answer.
When she recognized Peter’s voice, because of her gladness she did not open the gate, but ran in and announced that Peter stood before the gate.
But they said to her, “You are beside yourself!” Yet she kept insisting that it was so. So they said, “It is his angel.”

“You are beside yourself. . . It is his angel.” In this humorous exchange the household of guests could not at first believe their prayers had been answered but thought instead that Rhoda had lost her senses. Probably because the situation seemed so impossible, they couldn’t believe that Peter could have been freed so soon. Or they may have thought that he had already been executed, and his guardian angel had come to pay a visit. According to Jewish superstition, each person’s guardian angel could take on the form of the person he was guarding.

V 16 Now Peter continued knocking; and when they opened the door and saw him, they were astonished.

“They were astonished.” Through the power of God the impossible had become possible, and in our earth-bound realm that is always an astonishing thing.

V 17  But motioning to them with his hand to keep silent, he declared to them how the Lord had brought him out of the prison. And he said, “Go, tell these things to James and to the brethren.” And he departed and went to another place.

“Tell these things to James.” James, the Lord’s brother, was recognized now as head of the Jerusalem church. In case Herod’s men should come looking for him, Peter did not go to the main HQ of the Jerusalem church but to Mary and John Mark’s house to relay to them the happy news of his escape. Then for the sake of everybody’s security, it seemed he laid low for awhile: “he. . . went to another place.”

V 18-19 Then, as soon as it was day, there was no small stir among the soldiers about what had become of Peter.
But when Herod had searched for him and not found him, he examined the guards and commanded that they should be put to death. And he went down from Judea to Caesarea, and stayed there.

“No small stir among the soldiers.” There was no way to explain Peter’s escape other than as a miraculous occurrence. Unfortunately, Herod did not see it that way when he “examined the guards” and had them “put to death”. It was the Roman custom that a guard who allowed a prisoner to escape would suffer the same penalty that awaited the prisoner.

“Went down from Judea to Caesarea.” Herod went “down” in elevation from Jerusalem, but northward to Caesarea, the seat of the Roman government in Israel.

V 20  Now Herod had been very angry with the people of Tyre and Sidon; but they came to him with one accord, and having made Blastus the king’s personal aide their friend, they asked for peace, because their country was supplied with food by the king’s country.

“Tyre and Sidon.” These port cities of Phoenecia north of Caesarea depended on Galilee for agricultural products. (And Herod’s nation also benefited from Phoenecia, but to a lesser degree.) “Blastus the king’s personal aide.” Herod’s treasurer, acted as an intermediary; it seems there was some kind of dispute between their nations that the Phoenecians were eager to get resolved.

V 21-22 So on a set day Herod, arrayed in royal apparel, sat on his throne and gave an oration to them.
And the people kept shouting, “The voice of a god and not of a man!”

“A set day.” A feast in honor of Herod’s patron, the Roman emperor Claudius. “Arrayed in royal apparel.” This was thought to be a garment made of silver. “Gave an oration unto them.” If the audience consisted of the people from Tyre and Sidon, then Herod was assured of their flattering appreciation, which they certainly gave him, shouting that it was “the voice of a god, and not of a man”.

V 23  Then immediately an angel of the Lord struck him, because he did not give glory to God. And he was eaten by worms and died.

“Eaten by worms.” Apparently, Herod endured terrible pain for 5 days before he died. A sobering lesson on the dangers of pride. After executing James the Apostle and the guards who had watched over Peter, Herod’s cup of iniquity had about reached its limit, and with this last display of arrogance “an angel of the Lord struck him, because he did not give glory to God”.


V 24 But the word of God grew and multiplied.

With Herod gone, there was greater freedom to spread the Word.

V 25 And Barnabas and Saul returned from Jerusalem when they had fulfilled their ministry, and they also took with them John whose surname was Mark.

“Barnabas and Saul returned from Jerusalem.” After distributing the famine relief funds (11:29-30), they returned to Antioch, bringing with them John Mark.