1 – Introduction
2 – To Use or not to Use the Strict Chronology Version
3 – How Genesis Genealogies were Abridged
4 – Thread of History not Lost in the Post-Flood World
5 – Examination of the Genesis Chronology
6 – Writing and Technology: Did Mankind have to Start from Scratch?
7 – The Ice Age
8 – Conclusion

What is the age of the Earth? Or when did human history begin? For generations curious truth-seekers have tried to answer such questions. And indeed, it would be a marvelous discovery if we could ever figure out the exact date of  humankind’s beginning (and the Earth’s beginning).

Remarkably, there are genealogical records that have survived since the beginning of time and the creation of the first man and woman. These ancient records may be found in the Book of Genesis. . . and in the sacred literature of certain ancient societies other than that of the Hebrews.

Any estimation of the age of the Earth would be incomplete if it did not factor in these sacred chronologies; it is not enough to rely only on the theories and conclusions emanating from the world of academia. In this particular area of research – prehistory –their assertions tend to be based on speculation more than on hard, scientific evidence. (Nevertheless and unfortunately, these speculations are sold to an unsuspecting public as if they were reliable, scientific truths.)

Ancient records may not be able to render a perfectly accurate estimation of the span of human existence. Due to the number of generations involved and the chaotic course of human history, a rough estimation is about the best we can hope for. Nevertheless, it is astounding that such genealogies exist at all. Just the fact that several ancient societies have preserved genealogies that stretch all the way back to the Great Flood and/or right back to the very Beginning, is something that should catch our attention.

For anyone who is seriously interested to know about the origin of human history (even biological and geological history), it would be a glaring oversight to ignore or dismiss these ancient records as fanciful or mythological works.

Indeed, it is almost a matter of common sense. If we sense, believe, or understand that we and our environment were created by a Higher Being, and if we believe He is concerned for His creations, then it is perfectly reasonable that such a wise and powerful Being would not leave us in the dark about our origins.

This study will not delve into the scientific reasons for understanding how or why our environment and human history had a definite starting point. If the reader wishes to explore that particular aspect of the age-of-the-earth issue – that is, the formation of the natural world by a supernatural Creator and its re-creation in the Great Flood cataclysm – he or she may learn more about those intriguing subjects in the section of this website called “Has the Earth Already Had an ‘End Time’? Retrieving Mankind’s Lost Heritage”: Posts 2A, 2B, 2C, 2D, 3A, 3B, 3E, 4-D, 4-E, 5A-F, 6A, 6B, 6C.

It may be startling to think that mankind had a definite starting point. But if such really were the case, then we should expect to find at least some genealogical records somewhere that date all the way back to that very beginning. The fact that a few such records do exist in separate ancient societies and that these chronologies go all the way back to the same beginning stands as compelling evidence that human history did indeed have a definite starting point. . . or two starting points really – first in the Garden of Eden, and then in Earth’s new environment created by the Great Flood cataclysm. 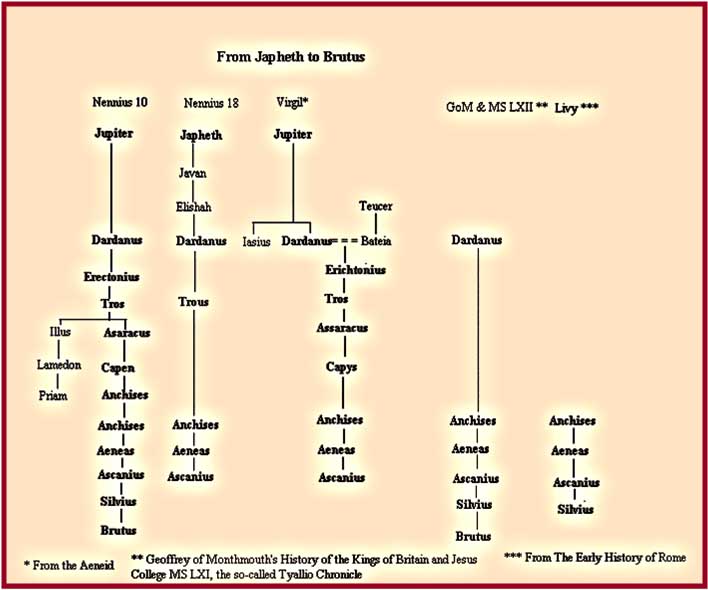 In the above table, Bill Cooper in his book After the Flood has “brought together the genealogies contained in no less than five diverse and ancient sources” (some from Anglo-Saxon tribes, some from ancient Roman scholars). Three of the genealogies trace their origin all the way back to the same original Japheth, or Jupiter as he was known among the ancient Latin races. (In the Sanskrit Puranas he was known as Jyapeti.) Six of the seven sons of Japheth (son of Noah) migrated northwards after the Flood and populated Europe long ago. As a result Japheth became honored as the father of the European races. Because of the tendency of ancient tribes to worship their ancestors, eventually Japheth became exalted in Roman mythology as the chief of the gods, Jupiter.

Many religions teach that human history began abruptly. No gradual progression of ape-men and so on, but an instant creation of the first human beings. (For some information on this, from the scientific viewpoint, see the post “Monkey-to-Man Evolution?”) And again, if that is true, then it should come as no surprise to find that some ancient societies have managed to keep and pass on a chronology of their ancestors dating all the way back to the Beginning.

With this foundation of understanding – that there was a definite beginning to human history – this study will focus on trying to get some accurate insight as to what our sacred records can teach us about that intriguing mystery: the age of the Earth.

Continue to Chapter 2: To Use or not to Use the Strict Chronology Version

UNRAVELING THE MYSTERY OF THE IMAGE (Ch 7)