B-1: Resurrection and Rapture?
B-2: What about Evildoers?
B-3: What Purpose this Life on Earth?
B-4: Judgment Seat of Christ
B-5: “I will Give Thee a Crown of Life!”
B-6: Heaven’s Class Structure – No Envy or Comparing
B-7: Life – a Continual Learning Process


B-1: Resurrection and Rapture

The terms “Resurrection” and “Rapture” are key concepts in this study about Heaven and Hell. It will be helpful then to get an accurate idea of what they mean.

In most basic terms, “Resurrection” means “a raising or rising up”. And in the Biblical context, it means to “cause to rise or raise up from the dead”. It is the reversal of the Curse pronounced on Adam and Eve (and all humanity) that “you shall surely die” because of having eaten from “the tree of the knowledge of good and evil”. (Genesis 2:17) So in very general terms, Resurrection means the raising of the dead back to life.

The separation of body and soul caused at death is an unnatural tragedy, which will be remedied when the body is resurrected, allowing humans to exist as they were intended to do. [“Mankind,” ESV Study Bible (2007 edition), pg. 2528]

Resurrection is the great promise of all ages that will reverse the sorrowful condition of mankind. Since the Garden of Eden, the human race has been haunted with the gloomy prospect of facing death without any knowledge of what will follow. Is it the end of existence, period? Or will the Afterlife catapult one into an abyss of hellish horrors, or some kind of endless darkness, or some state of disembodied helplessness? These were the troubling thoughts that have disquieted the minds of people for generations.

The Jews were the one people who did have some comfort, knowing that the Resurrection would come some day, but it was a long way off in some vague and far-away future at the “end of the Age”. It was a distant concept in the minds of most. But then along came Jesus Christ who gave a clear demonstration of its reality.

Towards the end of His earthly life, Jesus arrived in the town of Bethany; this was four days after the death of His “friend Lazarus”. Upon His arrival, Jesus told Lazarus’s sister Martha, “I am the resurrection and the life” in answer to her expressed hope: “I know that he [Lazarus] will rise again in the resurrection at the last day.” (John 11:24-25)

At this moment He felt so sorry for their distress that He “wept.” And since He was God, the One who would orchestrate the Last-Day Resurrection, He proved and gave a little foretaste of His divine supremacy over death with the astonishing miracle of raising Lazarus from the dead, a deed which certainly validated Martha’s belief in the Last Day Resurrection. (John 11)

This was such an extraordinary event that the chief priests, perceiving it as a threat to their authority and influence, “plotted to put Him to death”; and not only that, but “plotted to put Lazarus to death also.” (John 11:53, 12:10)

Of course, the main Resurrection demonstration that Christ gave was that of His own self. His physical body, which had died on the cross, was raised to life after three days. This so astounded and motivated the disciples who witnessed it that they spent the rest of their lives testifying to Christ’s great and awesome victory over Death’s dominion. And from this was born the revolutionary movement of the Early Church and Christianity.

For the Jewish people of that era, the return to physical life was how they understood the Resurrection would be manifested. The Old Testament Scriptures exhibit a confident expectation that “the meek shall inherit the earth”. (Psalm 37:11) Although it was understood that some of that “inheritance” can happen during a person’s own lifetime, the central idea was that, eventually, the Day of Judgment would come, evildoers would be cast out, and the righteous, resurrected in new bodies, would “inherit the earth”. 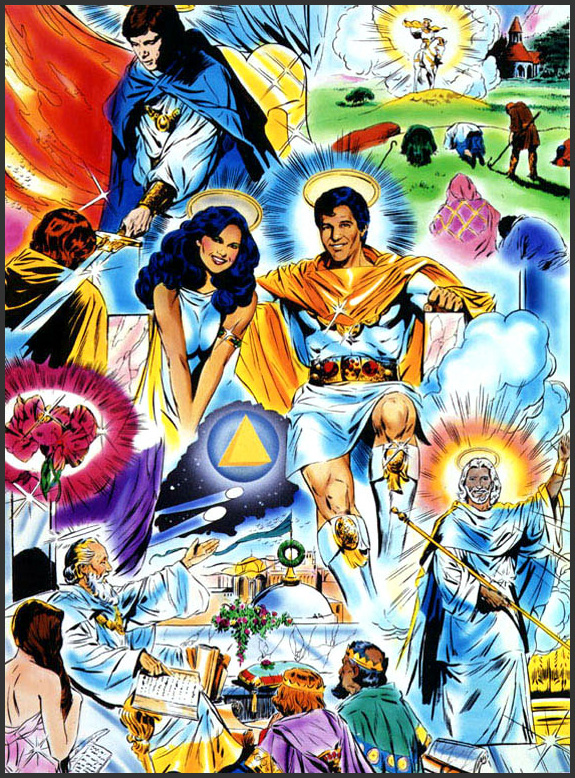 Ruling in Kingdom Come (by The Family International) depicts Christ’s statement in Matthew 5:5, “Blessed are the meek for they will inherit the earth” – meaning, of course, that “the meek” will become Earth’s new rulers

A rather intriguing aspect of this Resurrection is that the new physical body will not be subject to the problems that our bodies presently experience; they will even have supernatural capabilities. “The Lord Jesus Christ. . . will transform our lowly body that it may be conformed to His glorious body.” (Philippians 3:20-21) And we learn from the Gospels that Christ’s “glorious body” was able to do some amazing things: it could appear or disappear, go through walls, ascend into heaven (or fly?). So there is much to look forward to.

Besides the Resurrection of His dead body to physical life, Christ’s spirit was also raised out of the realm of spiritual death, from the prison of Hell (as outlined in the earlier Post “Second Chance for Unbelievers?”).

“For just as Jonah was three days and three nights in the belly of the sea monster, so shall the Son of Man be three days and three nights in the heart of the earth.”
“(Now this expression, “He ascended,” what does it mean except that He also had descended into the lower parts of the earth? He who descended is Himself also He who ascended far above all the heavens, that He might fill all things.)”
(Matthew 12:40, Ephesians 4:9-10, NAS)

The phrases, “in the heart of the earth” and “lower parts of the earth”, point to Christ’s sojourn in the domain of Hades – that time between the Crucifixion and the Resurrection,.

This raising of Christ and many of the “spirits in prison” from Death and Hell relates to another form of Resurrection, which happens frequently in our present Age – when a soul is “born again”. (John 3:3) A person receives Christ, is washed by the infilling of the Holy Spirit, and becomes a “new creation”. (2Corinthians 5:17) The new believer gains a whole new and positive direction in life. He or she experiences a healing of the soul. “And you He made alive, who were dead in trespasses and sins.” (Ephesians 2:1)

As believers, in a sense we experience two resurrections. The first is experienced spiritually through salvation, and the second will occur physically when Jesus returns and our bodies rejoin our spirits. (“The Resurrection and the Life,” Jesus His Life and Message: The “I Am” Sayings by Peter Amsterdam)


Here is the wonderful thing that Christ’s sojourn in our world brought: a person’s entry into the Kingdom of God doesn’t have to wait until one’s death but can start during one’s earthly lifetime. Christ promised, “Everyone who sees the Son and believes in Him may have everlasting life; and I will raise him up at the last day.” (John 6:40).

In other words, by coming to Christ, a person’s “Resurrection” is sealed ahead of time. This kind of Resurrection, which works spiritually during the earthly life, can also bring healing of the body from afflictions or addictions. In a sense, it is like a mini-Resurrection, a taste or foreshadowing of the full reality of the Resurrection that is to come. Jesus Christ has simply led the way. “He is the head of the body, the church, who is the beginning, the firstborn from the dead.” (Colossians 1:18)

We may conclude then that the concept of Resurrection, in its widest sense – raising the dead to life – encompasses both physical and spiritual aspects of human existence. And all of this was made possible by God’s efforts to restore His relationship to mankind through the work and sacrifice of His Son.

What Is the “Rapture”?

In the Old Testament there were two people mentioned – Enoch and Elijah – who were translated straight from the earthly into the heavenly realm; they did not have to experience the death of their physical bodies, which apparently, by the power of God, were instantly transformed into spiritual bodies that could function in the Celestial Dimension. (Genesis 5:24, 2Kings 2:1,11-12) Their instant translation into Heaven were small examples that pre-figure the grand-scale “Rapture” that is to take place at the end of the Age. As far as we know, those who are still alive at that time will be translated in much the same way.

According to modern man’s scientific way of thinking, however, the whole idea of Resurrection, and even more so the Rapture, seems preposterous. Although Christians can accept these extraordinary doctrines by faith, it does help to understand that that faith is based on recorded testimonies from the past, including Jesus’ own deeds and words on the subject and His own Resurrection; we can trust then that this is a future event that will come to pass. The big question in Christian circles is “when?”

But first, it would help to know, what exactly is meant by the term “Rapture”? This event takes place at the Second Coming of Christ, when there shall be a seizing and carrying away of souls “en masse”, not just of those who are still alive at the time of Christ’s Second Coming, but also the “dead in Christ”. (1Thessalonians 4:16) These final moments of mankind’s history seem to happen in stages, beginning with the dramatic appearance of Christ in the heavens; then the angels will “gather together His elect. . . from one end of heaven to the other”. (Matthew 24:31) 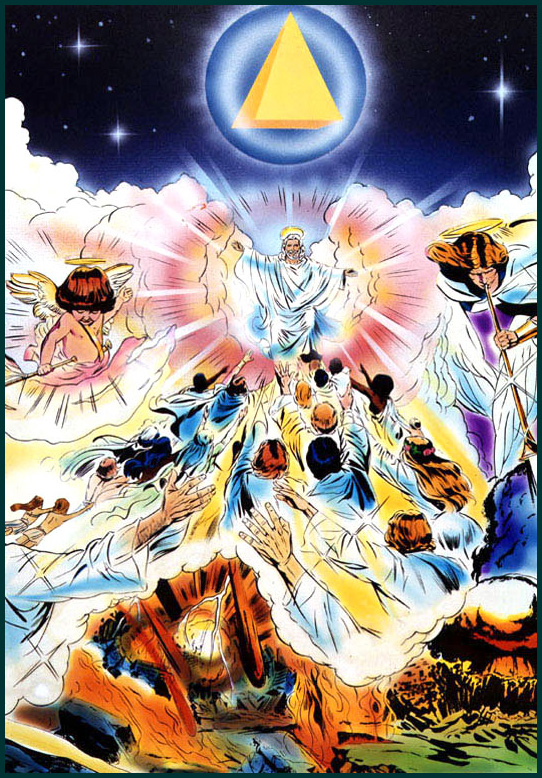 This “Rapture” is also known as the “first resurrection”. (Revelation 20:5-6) It is the sudden transfer and invitation to what is known as the “marriage supper of the Lamb”; and there, in some honored place in the Celestial Realm, the people of God of all ages will be assembled – “those who are counted worthy to attain that age, and the resurrection from the dead.” (Luke 20:35) “For the marriage of the Lamb has come, and His wife has made herself ready. . . Blessed are those who are called to the marriage supper of the Lamb!” (Revelation 19:7,9) 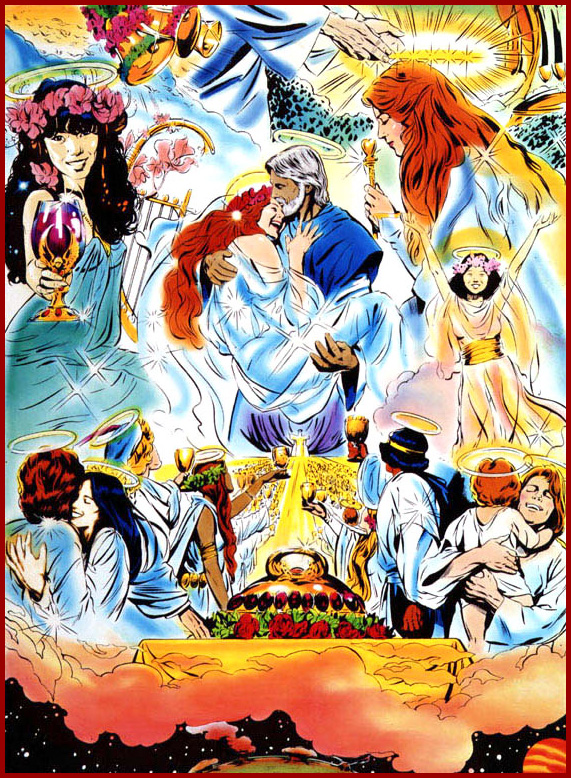 As in Matthew 24:31, this event is again referred to as a “gathering together” in 2Thessalonians 2:1. It almost sounds like a conference of delegates called to deliberate on some important leadership strategies. This would not be surprising in light of the fact that the Battle of Armageddon follows soon after the Marriage Supper: “Behold, the Lord comes with ten thousands of His saints. . . And the armies in heaven, clothed in fine linen, white and clean, followed Him on white horses.” (Jude 14, Revelation 19:14) This in turn is followed by the new government of Christ and the saints “who lived and reigned with Christ a thousand years.” (Revelation 20:4).

Perhaps then it wouldn’t be too much of a stretch to suppose that, besides being a victory celebration, the Marriage Supper is also a time to prepare for the future recovery and governing program of planet Earth, which by this time will be in pretty bad shape. At this time Earth’s future rulers will be outfitted with their new bodies, enabling them to function supremely well in the earthly environment.

Continue to B-2: What about Evildoers?

UNRAVELING THE MYSTERY OF THE ABOMINATION (11)