2 – To Use or Not To Use the Strict Chronology Version

1 – Introduction
2 – To Use or not to Use the Strict Chronology Version
3 – How Genesis Genealogies were Abridged
4 – Thread of History not Lost in the Post-Flood World
5 – Examination of the Genesis Chronology
6 – Writing and Technology: Did Mankind have to Start from Scratch?
7 – The Ice Age
8 – Conclusion

For a society to keep a chronology over a span of thousands of years is no small achievement. Every culture has to endure so many changes, movements, and instability. Nevertheless, some ancient societies did manage to guard their sacred records over the centuries – the Mayans, the Celts (Saxons, Scandinavians, Irish, Welsh), the Hebrews – were diligent in this respect. Based on these chronologies, below are some estimates of the age of the earth (since the Flood and since the original Creation): 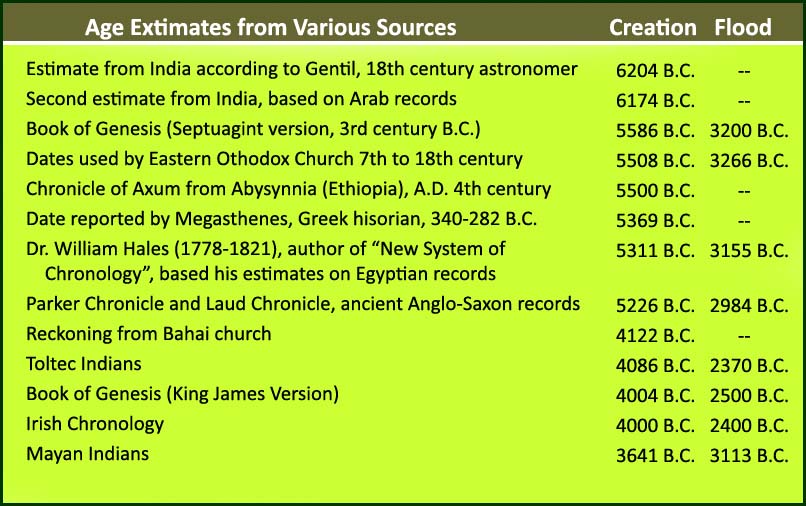 According to these ancient records from several sources, a relatively short span of time has elapsed since the Flood, and before that, since the original Creation. It’s actually a long time, but short in comparison to what we’ve been conditioned to think is the age of the earth.

Of all the different genealogies kept, the ones that are enshrined in the Bible are considered to be the most authoritative. Now those who espouse the reality of Creation as it is put forth in the Book of Genesis usually promote the concept of a 6,000-year span of time. If one follows the records exactly, as found in many modern versions of the Book of Genesis, they will be found to tally up to 6,000 years more or less.

This is a good estimation, far more accurate than what is usually promoted in science textbooks and the science world in general. Although the belief in millions and billions of years is widely accepted nowadays, there is plenty of evidence to show that this customary concept of vast evolutionary time spans does not hold up under the searchlight of scientific investigation and discovery. (Again, some of the posts in “How Old is the Natural World?”will furnish the reader with more information on this issue.)

Now regarding the 6,000-year age of the earth, there is some fine-tuning that can give us a better estimation of the Earth’s age. The 6,000-year figure might be termed a “strict chronology” interpretation. But there is reason to understand that a more “realistic chronology” approach is called for. For example, the Septuagint Bible (translation of the Hebrew Old Testament into Greek) gives a time span of 7,600 years for the age of the Earth.

This translation took place in ancient times (3rd century B.C.). Those who worked on it could have been more familiar with the historical eras that preceded them than we are nowadays. There is a good chance then that their version of the span of human history stands a better chance of being more accurate than those time spans that appear in the modern translations that we usually use today.

In this age of “fake news” and excess media bombardment, those who are sincerely interested in truth are exercising greater discernment, looking for precision and accuracy, not trusting anything that smacks of rhetoric or hype as we often see in glossy presentations on the web, TV, or in magazines, newspapers, documentaries, or movies.

As mentioned already, there is a mountain of geological and fossil evidence to support, from the scientific point of view, the Creation model for the mystery of human origin. And along with that, a mountain of scientific evidence in support of the fact that the natural world is rather young (at least compared to the standard vast ages of gradual evolution that is promoted so much nowadays).

So it is no surprise that those who espouse the Creation model have adopted the strict chronology interpretation of 6,000 years as a more or less official span of time for the age of the Earth. As mentioned, this is certainly better than the standard formula of millions and billions of years that is taught up and down and in and out of modern educational systems.

But nowadays, with the amount of information so easily available, there is need for a more nuanced and complete understanding of Biblical (and other) chronological systems. To believe in or follow the Creation model is a hard sell in this day and age. And those who are being introduced to the Creation point of view will have more faith to trust in what creationists have to say if they can sense that their explanations are well rounded and complete. Any aspects glossed over, any questions or issues left unaddressed or unacknowledged will be sure to come under scrutiny. (See Appendix 1: News article below)

The scientific aspects – paleontological, anthropological, biological, geological – offer good supporting evidence behind the assertion that human history (and geological history) had a definite starting point. That is, if we can discard the gradual-evolution lens and start looking through the lens of creationism, then the scientific evidence falls nicely into place.

But there is room for improvement in how to validate the contribution of the sacred chronologies to the Creation model. Chronologies, of course, fall less under the domain of science and are more a question for the historical, linguistic, cultural, and religious disciplines to deal with.

And to better validate the Creation model, it won’t help to ignore or try to evade some of the “glitches” in the sacred chronologies. Better to confront and elucidate them and show how the chronologies offer valid support for the Creation model – in spite of what we in modern times may think are their weak spots.

Appendix 1: “The Necessity of Credibility”

The following quote, intended for journalists, could be applied to how creationists may want to re-evaluate the necessity of sticking to the strict chronology interpretation of the Book of Genesis:

For progressives, having a reliable and trustworthy media means not being afraid of uncomfortable truths. . . The truth is a precious thing, and it should never, ever be distorted for partisan reasons. Being credible means being self-critical, and trying to build a press that people can depend on to help them sort truth from lies. . .
. . .They will have to interrogate their assumptions more, defend or revise their work in response to criticisms, and get serious about truth, fairness, and accountability. They. . . will need to be extremely cautious in their factual assertions. . .
Credibility is extremely difficult to achieve, and extremely easy to destroy. . . The only way to counter fake news is with real news. Not fake real news, or news that merely looks like news but is actually opinion or allegation. Actual real news. Substantive and serious reporting. A commitment to avoiding innuendo and anonymous sources. Transparency and a willingness to atone for mistakes.
[The Necessity of Credibility “– Nathan J. Robinson  (6 Dec 2016, Current Affairs)]

Continue to Chapter 3: How Genesis Genealogies were Abridged