Verse 2 “And now I will tell you the truth: Behold, three more kings will arise in Persia, and the fourth shall be far richer than them all; by his strength, through his riches, he shall stir up all against the realm of Greece.”

“And now I will tell you the truth.” The preliminaries are over, and Gabriel finally gets down to business, dictating to Daniel his grand revelation of future history. Gabriel’s manner of communication here was highly unusual. Many if not most of the Bible’s prophecies were received through prophets who acted as channels for the messages that were given to them from the Heavenly Realm; and they often had scribes to write down the messages they were receiving. But here it is different: the angel Gabriel is talking directly to Daniel, who in this case has become the scribe writing down what the angel is dictating to him.

It could be compared perhaps to having a face-to-face conversation rather than just speaking over the telephone. As a result there was more opportunity to provide clarity and insight – details that would not be so easy to convey over the normal “telephone” of channeled prophecy. Seldom was this means of communication used except on certain special occasions, such as here in chapter 11 (and chapter 9) of  the Book of Daniel, and in much of the Book of Revelation.

“And the fourth.” King Xerxes I, also known as Ahaseurus (in the Book of Esther) did “by his strength, through his riches. . . stir up all against the realm of Greece”. Up to this point the Medo-Persian empire had been expanding, and by the time Xerxes came to the throne, it had reached its pinnacle of wealth and power. The empire’s great resources were then harnessed into launching a war against the Greeks. Estimates vary, but the armed forces are thought to have totaled 2½ million, and if all the various attendants, supply lines, and servants are to be included, the total was over 5,000,000. (This was an estimate from Herodotus, a Greek historian of that time.)

In spite of waging this war with what was probably the largest army ever amassed in the world’s history up to this time, the Persian forces lost badly to the Greeks and their much smaller forces. The Battle of Salamis, 480 B.C., probably the first major naval battle in history, was the stunning defeat that broke the back of the Persian forces and forced them to retreat. Although this did not bring an immediate end yet to the Persian empire, it did signal the beginning of its end. It was left to another king, Darius III, in about 331 B.C. to lose the Persian empire to the forces of Alexander the Great.

(As a matter of interest, after the emperor Xerxes came Longimanus, or Artaxerxes I, as named in the Book of Nehemiah; it was during his reign that the Jewish leader, Nehemiah, secured permission to re-build the walls of Jerusalem.)

Gabriel’s words here agree with what had already been revealed to Daniel in chapters 7 and 8 about the rise of the Greek empire under Alexander the Great. (7:6, 8:5-8,21-22) The “mighty king” – Alexander the Great – conquered the Medo-Persian empire, and this bestowed on him a “great dominion” that extended from Greece to Egypt to the borders of India.

Like many powerful conquerors, there was no restraint on his willful and often arbitrary rule; he did “according to his will.” This, by the way, is a notable characteristic of the future Antichrist (according to verse 36 further on). It seems that once a powerful leader arrives at the stage where he can operate “according to his will”, then trouble usually follows.

The problem seems to be that very few who manage to garner so much power can handle it wisely – that is, according to God’s will rather than their own will, or even according to the will of wise counselors. This modus operandi has featured prominently in the reigns of tyrants throughout history.

An example from modern times is Adolf Hitler. The German Fuehrer rose to power because he was willing to break through established constraints and virtually bluff his way through to success. In the beginning it paid off not to listen to anyone. But then, after victory and success had been achieved for the German people, Hitler got de-railed; he became overconfident and refused to listen to the voice of caution and common sense and counselors who were urging restraint. His modus operandi of going “according to his will” ultimately led to his downfall.

“And when he has arisen, his kingdom shall be broken up.” As the wording here suggests, Alexander’s kingdom was short-lived. In the space of only 10 years Alexander had conquered most of the known world, but then he died suddenly in 323 B.C.

As predicted, the mighty Greek empire did not go through a gradual decline but was quickly “broken up and divided toward the four winds of heaven.”  This may be just an expression to show that the empire disintegrated, but at one point (301 B.C.) the Greek empire actually was carved up into four territories under four Greek generals, and even to “the four winds”, or the four compass directions (more or less). (See map below.) 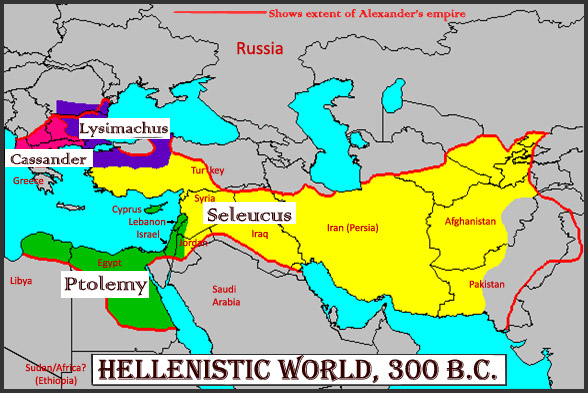 “Not to his posterity, nor according to his dominion which he ruled.” The Greek empire did not go to Alexander’s offspring (“his posterity”), nor did it remain as one empire but was divided “toward the four winds”. Not only that, but the dominions of the four generals also changed hands somewhat, and as time went on, the kingdom grew more and more divided. “For his kingdom shall be uprooted, even for others besides these (four generals).”

Retrieving Our Lost Heritage (5A)

UNRAVELING THE MYSTERY OF THE ABOMINATION (7)