Appendix: Date of the Crucifixion

As far as is known, the date of the Crucifixion was never recorded; however, we can get a fairly good idea of the timing by looking at another recorded event of secular history that is mentioned in Luke 3:1-2. “Now in the fifteenth year of the reign of Tiberius Caesar… the word of God came to John the son of Zacharias.” This date – the beginning of John the Baptist’s ministry – then is like a marker coming some reasonable time before Jesus began His public ministry (or we could say His Messiahship).

The actual start of Tiberias’ reign is where the question mark comes up. Because of the possibility that he may have been a co-regent with his father-in-law Augustus Caesar for two years, there is some confusion as to whether his reign began in A.D. 11/12 or A.D. 14 when Augustus Caesar died. But A.D. 14 seems the more likely time as that was the official start of his reign. In this case, 15 years later (“the fifteenth year of Tiberias Caesar”) would mean that John started his ministry in A.D. 29. 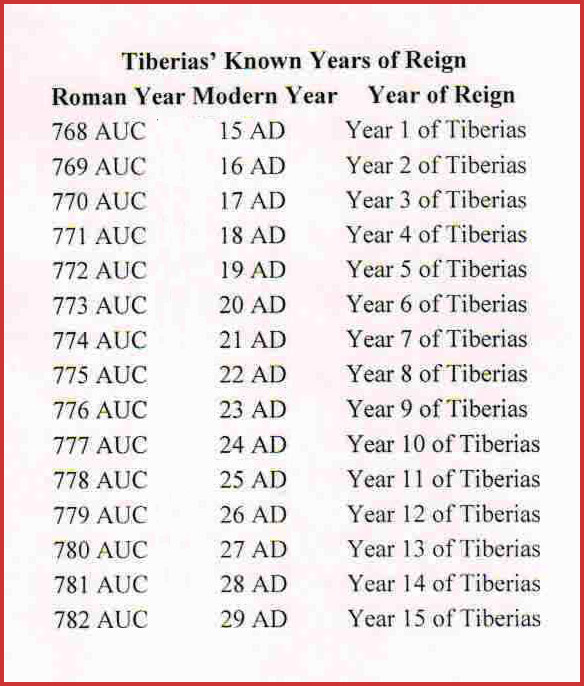 [AUC stands for Ab urbe condita, Latin for “from the founding of the city (Rome)”]

In our calculations we shall assume the date of A.D. 33. If John the Baptist started his preaching in A.D. 29, then Jesus would have started His work a short time later. Based on the Gospel accounts, Jesus’ public ministry should have lasted about three years. The date of A.D. 30 for the Crucifixion doesn’t allow enough time from the start of John’s ministry to the completion of Jesus’ ministry, whereas the date of A.D. 33 allows the right amount of time.

The following excerpts from the ESV Study Bible contains some helpful, updated information about the date of the crucifixion:

Tiberius’s 15th year. The ancient sources unequivocally state that Tiberius began his reign upon the death of Emperor Augustus in August of A.D. 14. While some scholars, as noted above, propose that there was a co-regency of Augustus and Tiberius between A.D. 11/12 and 14, no reliable ancient evidence for such co-regency has ever been found. While Tiberius may have been given charge of certain provinces prior to Augustus’s death, this co-administration was most likely not empire-wide, and ancient sources universally reckon the beginning of Tiberius’s reign from A.D. 14. But even if, for argument’s sake, such a co-regency did in fact occur, it is still much more likely that the calculation of Tiberius’s reign would have begun in A.D. 14, and therefore Jesus’ ministry began sometime between late A.D. 28 and A.D. 30 (see first section above).
The 46 years of building the temple. In seeking to understand the references to the temple in Jesus’ interchange with the Jewish leaders in John 2:20, it is important to recognize that “temple” in this passage refers to Greek naos, the sanctuary or temple proper. . . not the surrounding temple complex (Gk. hieron). . . Josephus (Jewish Antiquities 15.380,421) does not merely refer to the beginning of renovation of the temple sanctuary in 20/19 B.C. but also to its completion one and a half years later in 18/17 B.C. (The wider temple area, however, continued to be renovated.) Therefore, when Jesus and the Jewish leaders are speaking of the construction of the temple proper (naos) in John 2:20, they cannot be talking about that renovation as still ongoing, because, as Josephus makes clear, that renovation had in fact been completed decades prior to that time (46 years to be exact).
For this reason it is much more likely that the Jews are saying that the construction of the temple sanctuary was completed 46 years ago (18/17 B.C.). (The Gk. Expression in John 2:20 can legitimately be translated, “This temple was built forty-six years ago.” This makes better sense of the Gk. Grammar. . .) If this is the case (as seems much more likely), then 46 years later than 18/17 B.C. yields A.D. 29/30, which, in turn, comports well with a three-year ministry of Jesus and a crucifixion date of A.D. 33. Thus, John 2:20 occurred at the Passover on Nisan 14 of A.D. 30, and Jesus was crucified three years later, in A.D. 33.
Passovers in John. John seems to assume that Jesus’ ministry coincided with at least three or possibly four Passovers, which he mentions at different points in Jesus’ ministry (John 2:13//23; 6:4; 11:55//12:1). These make an A.D. 30 crucifixion difficult to maintain. . . This means that if Jesus’ ministry coincided with at least three Passovers, and if the first Passover was in A.D. 29, he could not have been crucified in A.D. 30.
But if John the Baptist began his ministry in A.D. 29, then Jesus probably began his ministry in late A.D. 29 or early 30 A.D. Then the Passovers in John would occur on Nisan 14 in A.D. 30 (John 2:13), Nisan 14 in A.D. 31 (either the unnamed feast in John 5:1 or else a Passover that John does not mention, Nisan 14 in A.D. 32 (John 6:4) and Nisan 14 in A.D. 33 (John 11:55, the Passover at which Jesus was crucified). If this reckoning is correct, then Jesus was probably crucified on April 3 (Nisan 14) in A.D. 33.
These references to Passover in John, then, most naturally suggest that during Jesus’ ministry he attended at least three, and possibly four, Passovers. . . resulting in a three-year ministry. Together with the reference to Tiberius’s 15th year – which, starting from A.D. 14/15 (see above), brings us to A.D. 29/30 for the beginning of Jesus’ ministry – the three-year ministry of Jesus indicated by John yields a crucifixion date of A.D. 33.
(“Evidence for A.D. 33” section of essay called “The Date of Jesus’ Crucifixion”, ESV Study Bible, pages 1809-1810.)

Yes, there is more in the sky which declares “Messiah has come.” But to see these things, we must know when to look up. Peter used the sky as a proof that Messiah had come, but which sky did he use? A body of scholarly work addresses the date of the crucifixion of Jesus of Nazareth. This body of work, together with Roman and Jewish histories, archaeoastronomy and the words of the Bible allow us to identify the day and almost the moment of his death. That is an extraordinary claim. You must judge it for yourself. Consider the evidence.

What can we learn from the Jewish calendar? Quite a lot, if we assemble the puzzle pieces. By law and custom, the Jewish people of Jesus’ day took the Sabbath as a day of complete rest.1 Because no work could be done on the Sabbath, which we call Saturday, Friday came to be known as Preparation Day.2 It was a day when food and other things needed for Saturday were prepared in advance. This is our first clue to the date of the crucifixion, because all four Gospels state that Jesus was crucified on Preparation Day, a Friday.3 This is also the common consensus of the Church Fathers and scholars throughout church history.4

If you are interested in scholarly analysis of the date of the execution, Hoehner is an excellent reference.

The Gospels also record that the crucifixion occurred the day before the Passover festival.5 This is a second important clue, because it gives us a solid connection with the ancient Jewish calendar system. Passover always begins on the 14th day of the Jewish lunar month of Nisan. (Nisan 14 is in the Spring, which is why Easter is celebrated then). By Judean tradition, Passover begins at twilight, the dividing line between Nisan 14 and 15.6

5 The Book of John, Chapter 13:1 “It was just before the Passover Feast. Jesus knew that the time had come for him to leave this world and go to the Father. Having loved his own who were in the world, he now showed them the full extent of his love.”
6 Judeans reckoned the 24-hour day from sunset-to-sunset. The Book of Leviticus, Chapter 23:5 “The LORD’s Passover begins at twilight on the fourteenth day of the first month. . .”

Gallileans, like Jesus, apparently reckoned the 24-hour day from sunrise-to-sunrise. This is the day-reckoning of the gospels of Matthew, Mark and Luke. Jesus and the disciples ate the Passover meal on the Thursday preceding the crucifixion, at what we call the Last Supper. See, Harold W. Hoehner, Chronological Aspects of the Life of Christ, Chapter IV: “The Day of Christ’s Crucifixion” (Grand Rapids: Academie Books, 1977) ISBN 0-310-26211-9.

On the Jewish calendar (and on ours) a numbered day of the month may fall on any day of the week. For example, in one year your birthday might fall on Tuesday, in the next year it might fall on Thursday. This “float” among days of the week is why this second clue is so powerful. Putting these two Biblical puzzle pieces together, we see that the crucifixion must have occurred in a year when Nisan 14 happened to fall on a Friday, Preparation Day. That narrows things down considerably.

The Year. Ancient non-Biblical historians record that Jesus was condemned to death by Pontius Pilate.7 Pilate was Roman procurator of Judea during the years 26 AD through 36 AD.8 This limits our search for a date to those years. In “Setting the Stage” we found that Jesus was born in 3/2 BC. And there are also important Biblical clues: the Book of Luke records that Jesus began his public ministry when he “was about 30 years old”,9 and the Book of John records three annual Passovers during Jesus’ ministry.10 Taken together, these puzzle pieces add to a crucifixion date in the early 30’s, AD. During those years, Nisan 14 fell on a Friday, Preparation Day, twice: on April 7 of 30 AD and April 3 of 33 AD.11 To help us choose between those two dates, there is ample and fascinating evidence.

(By Frederick A. Larson)

The Bethlehem Star site (no longer aavailable) went on to list some other clues as to why the A.D. 33 date is preferable to A.D. 30: certain political events that had just taken place in Rome (from October, A.D. 31 onwards) and were influencing Pontius Pilate to please the elite Jews by allowing Christ to be executed; the ending of the time span of 483 years in the year A.D. 33; an unusual astronomical sign – a blood-red moon, a lunar eclipse – at the time of Jesus’ death.