The infamous raid on the Branch Davidian compound in Waco, Texas, 1993: During that tragic event, an “abomination that makes desolate” (a war tank) entered a sort of “holy place” (the Branch Davidian compound). Could not this tragic event be viewed as a mini historical preview of things to come – a foreboding forecast of that dreadful day when the “holy covenant” is broken? 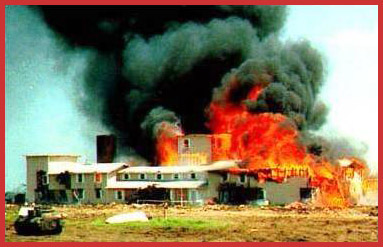 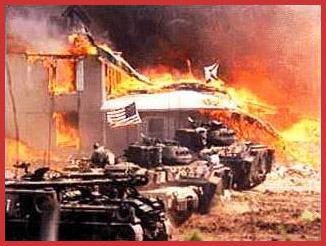 Another invasion of a “holy place” occured in 1984 when Indira Gandhi sent troops and armored vehicles into the Sikhs’ Golden Temple in Amritsar, India. In the year that followed that event, there was much instability in India. Likewise, when the “abomination” enters the Jerusalem “holy place”, instability, war, and persecution will break out all over the world during the time known as the “Great Tribulation”. (Matthew 24:15-21, Mark 13:14-19, Daniel 8:13) 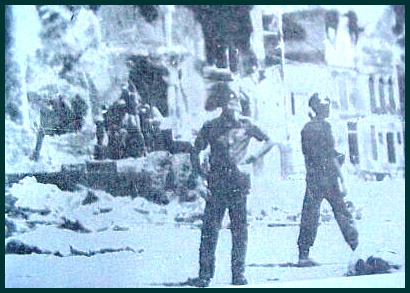 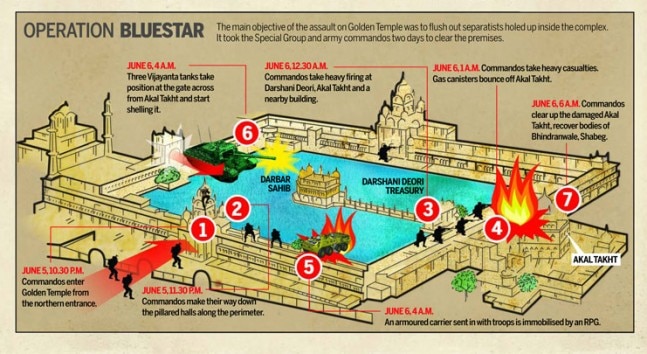 Given the limited time frame and the fact that this event is supposed to happen exactly on the mid-point of what the Scriptures point to as the last seven years of history, then it will have to be dramatic and quick – something to which a precise date can be easily attached. * There can’t be any confusion about it. The moment of the abomination’s entry into the “holy place” can’t be long and drawn out. It’ll be a definite, easy-to-mark event on the calendar, a clear signpost, something very obvious for God’s people that will mark the beginning of the last 3½ years (1,260 days) of the Great Tribulation.

It is easier to picture this kind of scenario as a dramatic event, such as, for example, a war tank entering the holy place (something the world of believers can easily see and be shocked at and warned by). Nowadays, it is commonly thought that the abomination will be some sort of modern-style idol and/or super computer. This approach is based on the assumption that the references to the “abomination” (in the Book of Daniel and the Gospels) and to the “image” (in the Revelation Book) are talking about the same thing. And this is a well-meaning attempt to understand these mysteries in a way that seems to make sense.

But from a practical point of view, there are some difficulties; to install something like a robot idol or super-computer would be an awkward, slow process and could encounter some major logistical hurdles. For example, would they try to assemble it in a back room of the temple, hoping that none of the priests will find out what’s going on? Or will they pre-fab it outside, manage to wheel it in at the right moment, and then plug it in? Would installing this kind of sensitive equipment in a war-torn area of the world not be too risky because of the weakened infrastucture? Supercomputers that manage the world’s credit systems are already functioning in safe locations. So why bother with trying to establish one in a war-torn country?

Or even if somehow it is a fairly simple operation, and an idol of the Antichrist, is it something the world will truly feel inspired to worship? (More on this question later.)

This event could be compared to planting a flag on a newly discovered territory. The flag is a rather insignificant thing in itself but is easily seen and has tremendous symbolic significance. So it would be for a vehicle of destruction entering the “holy place”. It’s a simple operation, but it displays before the world the Antichrist’s rebellion against God; and for God’s people, it’s a red flag of warning.

For the evil forces it’s their triumphant hour, their apparent conquest of God and religion; they’ve dared to place their abomination of desolation in this internationally recognized sacred spot. “Might is right”. Their weapons have overpowered this tangible symbol of religious freedom.

It’s not that the Jewish temple has to be any great symbol of God’s presence in the earth, but because of the “holy covenant” to which the Antichrist has agreed, the issue of religious freedom throughout the world will hinge, it seems, on what happens to that small bit of religious real estate.

When the Waco catastrophe took place, the world could see what was going on through television; everyone knew the exact moment when the “desolating abomination” entered the compound, and how it caused the awful tragedy that ensued. Likewise, a war tank (or some vehicle/weapon of war) entering the “holy place” in Jerusalem would be a dramatic news event the whole world could witness via television. (“Ye shall see the abomination.” – Matthew 24:15, Mark 13:14)

Everyone would know exactly when it happens (and it would happen in one day). Thus, it will be a clear marker for the start of the Antichrist’s final stand against the forces of Heaven – the dire warning signal that the Great Tribulation has begun (and also a signpost to encourage the world of believers that Jesus’ return is just around the corner.)

And it’s the kind of event that could trigger the Great Tribulation in two ways: Firstly, a provocative incident like this would quickly escalate the level of warring among the nations; and secondly, such an event would, in very obvious fashion, mark the breaking of the “covenant” and the start of official, worldwide persecution against the worshipers of God. (Daniel 9:27, 11:28,30-32)


To stop the sacrifices and religious worship in the “holy place” will require force, and there’s no way to do this other than for the Antichrist to send his soldiers and weapons into the temple. And that’s what the “abomination of desolation” is; it’s part of this operation of halting religious worship so he can begin the secular worship of himself. “Who opposeth and exalteth himself above all that is called God, or that is worshiped; so that he as God sitteth in the temple of God, shewing himself that he is god.” (2Thessalonians 2:4)

And, to the evil forces of the world, this opening shot fired against the “holy place” and the “holy covenant” signals to them the beginning of their all-out “war against the saints”. (Matthew 24:15; Daniel 11:28,30; Revelation 13:7)