Clue #2 – What Kind of Desolation?

“Desolation” in the New Testament

Now, it just so happens that the particular (noun) form of the Greek Word used here for “desolation” – eremosis – comes up only three times in the New Testament. In the first two occasions – Matthew 24:15 and Mark 13:14 – we find the phrase “abomination of desolation”.  And its appearance marks the start of the Great Tribulation – that turning point in history when all restrictions against the evil forces are swept away, and God’s people will have to flee for safety. It is the


Matthew 24:15 “When ye therefore shall see the abomination of

spoken of by Daniel the prophet, stand in the holy place, (whoso readeth, let him understand:)”

Mark 13:14 “But when ye shall see the abomination of

spoken of by Daniel the prophet, standing where it ought not, (let him that readeth understand,) then let them that be in Judaea flee to the mountains:”

The third reference, Luke 21:20, is a little different. The passage context is pretty much the same (Jesus outlining different signs that will precede His Second Coming) until the point comes where one would expect to read about the “abomination of desolation” (as in Matthew and Mark). The verse starts off just the same – “when ye shall see…” – but then, instead of “abomination of desolation”, the passage reads, “Jerusalem compassed with armies“.

Luke 21:20“And when ye shall see Jerusalem compassed with armies, then know that the

And then the passage continues on in a vein similar to what Matthew 24 and Mark 13 say – about fleeing into the mountains and so on.

Well, this offers a pretty good clue. The “armies” and “desolation” of Luke 21:20 surely refer to a war setting and the kind of destruction that armies at war bring to a nation or city. And this suggests that the same word “desolation” found in Matthew 24:15 and Mark 13:14 could also be referring to violent, physical destruction. And if so, this should leave little doubt as to what kind of “desolation” the “abomination of desolation” is supposed to be capable of doing.

The similarity of these three verses and chapters suggests that the invasion of Jerusalem and its desolation (which would require the use of many instruments and vehicles of modern warfare) must be linked to the appearance of the abomination of desolation in the “holy place”. Both events must happen around the same time, and also the meaning of “desolation” in all three passages would likely be the same – referring to the kind of physical destruction that happens in wartime.

Conclusion: The “abomination of desolation” is one of many vehicles of war that invade and destroy Jerusalem and is the particular one that happens to storm its way into the Jewish temple.

“Make desolate” in the Old Testament

In the ancient Hebrew, the intensive form of this word (“to desolate”) was used in Daniel 9:27 and 11:31 in the phrase “abomination that maketh desolate”. Remarkably, these were the only two places (out of 92 altogether) in the entire Old Testament where this intensive form was used. And it means “make desolate violently” – certainly an apt descriptive word to use in reference to a modern vehicle of war. (For more explanation see below “Appendix: Hebrew conjugations”.)

If we consider that one armored tank, for example, could cause as much damage to a city wall in a few seconds as would take a whole army in ancient times several days to accomplish with their battering rams and other “engines of war”, then we can understand why the Lord used this intensive form of the verb “make desolate” to describe this mysterious invention of the future.


To appreciate the meaning of the phrase “make desolate” in Daniel 9:27 and 11:31, it helps to have a basic knowledge of how Hebrew verbs are conjugated. Not a very exciting subject, but for those who are interested, here is a helpful quote from the “Preparatory Note” to Robert Young’s Analytical Concordance to the Bible: 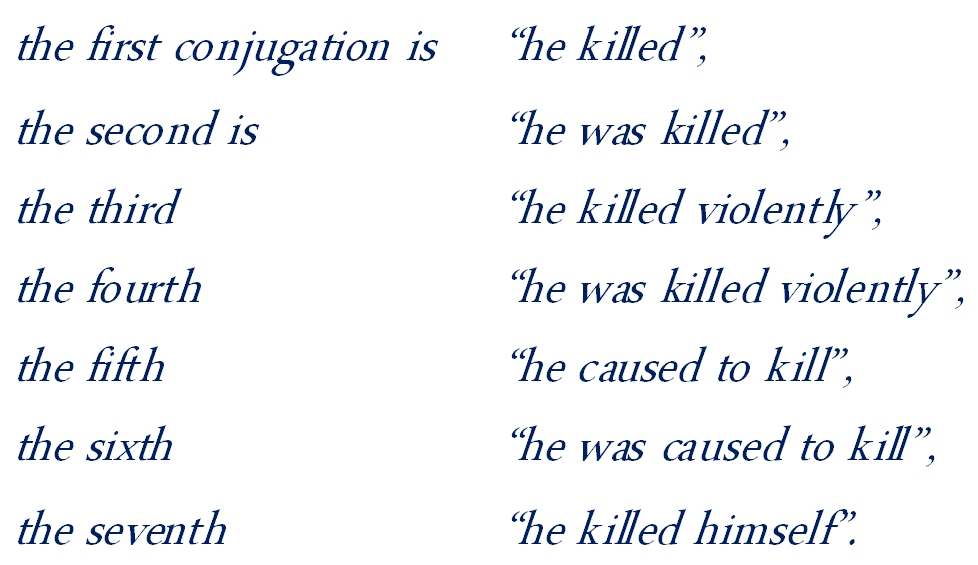 Though many exceptions are found, the general formula holds good very distinctly.”

The “make desolate” phrase is shamem in Hebrew and was written in the third conjugation, Piel, in Daniel 9:27 and 11:31. Hence the translation of this intensive form could have, or should have, said “make desolate violently.”

Continue to Part 3: Overspreading of Abominations

UNRAVELING THE MYSTERY OF THE IMAGE (Ch 2)