Before going any further, it will help to do a little fine-tuning of the last two verses in Revelation 13.

With this better translation, a certain parallel structure becomes evident, and this will make it easier to understand how this particular phrase applies to the future (and present day) commercial system. The first part of the verse has the phrase “buy or sell”, and this seems to parallel the phrase “mark. . . or. . . number” in the second part of the verse. 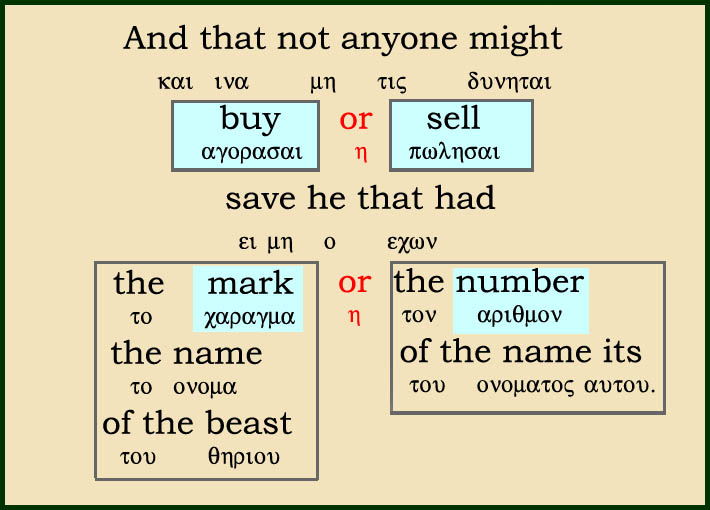 A literal translation from the Greek of Revelation 13:17 reveals the parallel structure between BUY-or-SELL and MARK-or-NUMBER

In commercial exchanges, a person is either buying or selling, meaning he/she is using either the “mark” or the “number”. Depending on what their part in the exchange is, they’re using one or the other, not both at the same time. 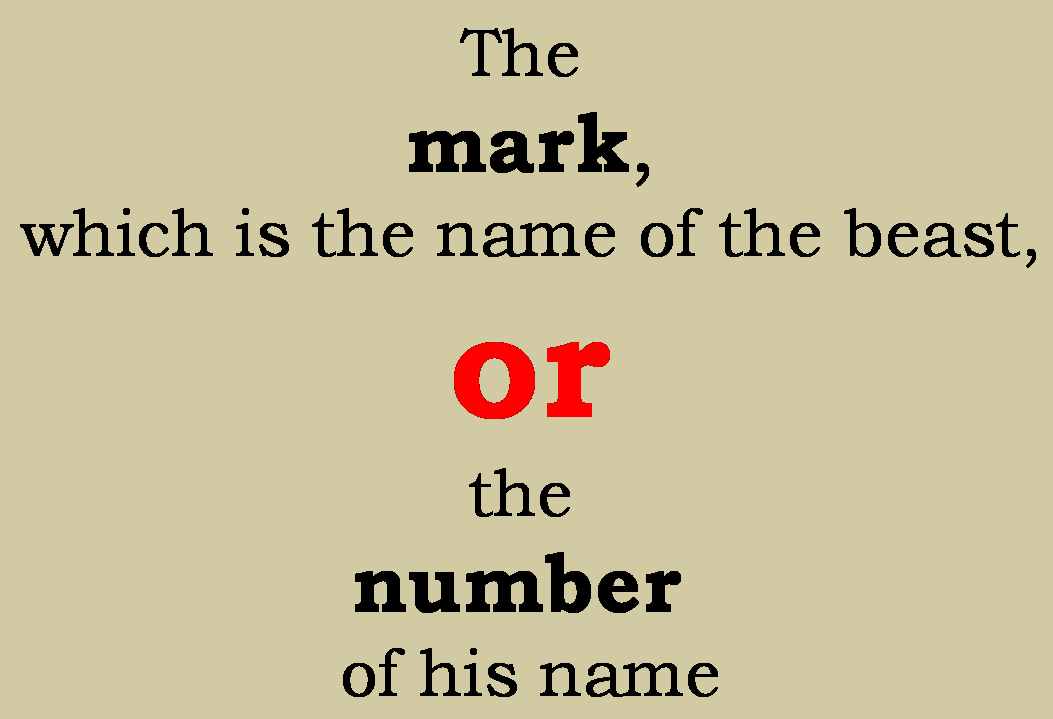 Then use the
MARK or NUMBER

Or to put it another way:

“No man might buy, save he that had the mark, which is the name of the beast,

no man might sell, save he that had the number of its name.”

In previous sections, we considered how the “mark”, because it is the “name of the beast”, will allow the masses to avail themselves of many benefits and privileges. But what about the number 666? It is called the “number of his name” in 13:17 and so must have something to do with the “name” (the power and authority) of the Beast. . . but to a lesser extent it would seem. So what does it do for a person, and how does it tie in with the “name of the beast”?

Regarding the “mark”, we generally understand that it works like a credit card; it can be used in the buying side of commercial transactions. What is not so clear, though, is how the “mark” could be used for selling. If you had to, let’s say, have the “mark” for both sides of the exchange, then it would have been worded “buy and sell”.

Of course, in the new system a seller may not be able to sell to anyone who does not have the “mark”. But otherwise, it doesn’t appear to be directly connected to the selling side of commercial transactions. No need then to conflate the functions of Mark and  Number; each is a different and separate operation in any monetary exchange.

Regarding the 666-number, unlike the “mark”, it is not found on people’s hands or foreheads. Instead, it is stamped on all the material goods that those who have the “mark” are entitled to buy.

As mentioned before, the bar codes used by marketers on all their goods and products have been encoded with the 666-number. And that number is needed in the selling side of commercial transactions, while the mark is needed for buying. Both buyer and seller make use of the number, of course. But the onus is on the seller to have the “number” available. Likewise for the mark, the onus will be on the buyer to have the “mark”.

Revelation 13:18 This calls for wisdom. If anyone has insight, let him calculate the number of the beast, for it is man’s number. His number is 666.

This is especially true in the Book of Revelation. Of the 22 other times that anthropos appears, it is always used in the general sense. Even in phrases like “a man”, the idea is that no particular man is intended, e.g. Revelation 4:7 – “face like a man”, or 21:17 (KJV) – “measure of a man”. In these examples, the term “a man” is talking about the appearance or size of men and women in general.

Anyway, this translation (“number of a man”) found in many Bibles has given rise to much speculation about the numerology of the Antichrist’s name. But probably, we should avoid the temptation to get specific in this way about the name of the Antichrist.

In the ancient Greek and Hebrew alphabets, there were no special symbols for numbers; instead, the letters of the alphabet were used for that purpose. And it was common, especially among the Jews, to represent a person’s name with a number, according to how the sum of the letters of his name would add up. So it is not surprising to see this custom coming to the surface here in this verse 18.

As a result of this practice, early Bible scholars were convinced that the “beast” was Rome because the words “Latin kingdom” and the name of the emperor Nero in Greek added up to 666. Later on at the time of the Reformation, the designation of Latin kingdom was transferred on to the Catholic Church and the Pope.

Translators were likely influenced by the prevailing historical milieu, and it wouldn’t be surprising if they tended to favor certain wordings, such as “number of a man” instead of “man’s number”. Especially among Protestants, such a translation would more easily implicate the Pope in the role of the Antichrist.

Well, that’s an old doctrine that might have held some relevance in bygone days, especially during the days of the Catholic Inquisition. But in today’s world, it would not be possible for the Vatican to conquer the world by force of arms or by financial means. It should be easy enough to see that the ultimate fulfillment of the Antichrist won’t have anything to do with today’s peace-loving Popes who, even if they wanted to, would not have the kind of temporal power needed for such worldly conquests.

So, all that to say, we don’t want to continue laboring under this old conception, or misconception, and the resulting translation, allowing it to influence our understanding of what this verse means.

Certain translations do give what is probably, in this case at least, a more accurate version of Revelation 13:18 than the KJV translators were able to:

In ancient Greek grammar construction, definite articles (the word for “the” in English) were used a great deal. For example, in a sentence like, “Mark was the apostle of God”, the literal translation into Greek would be, “The Mark was the apostle of the God.” So if a word (a noun) in Greek did not have a definite article before it, then it was definitely indefinite. And in verse 18 there is no definite article before the words “number” and “man”, and so the better translation would be “man’s number” or “number of man”. 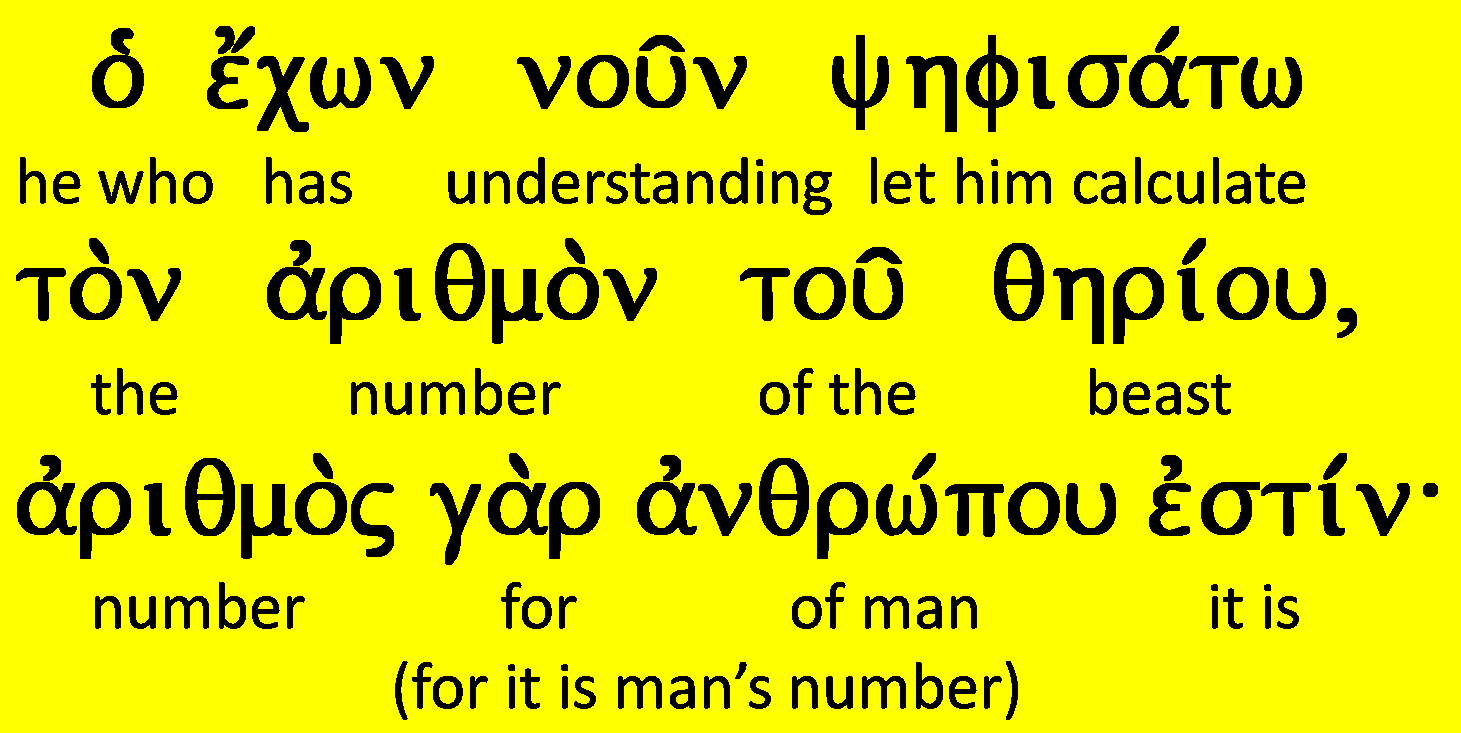