“No one could buy or sell unless he had the mark, which is the NAME of the beast or the number of his NAME.” (Revelation 13:17)

The various phrases in the Revelation Book about the Mark and the Number seem to indicate that the Name of the Beast is equivalent to the Beast itself, as visualized in the chart below. The Name covers even more territory, it would appear, and is also equivalent to the “mark”. 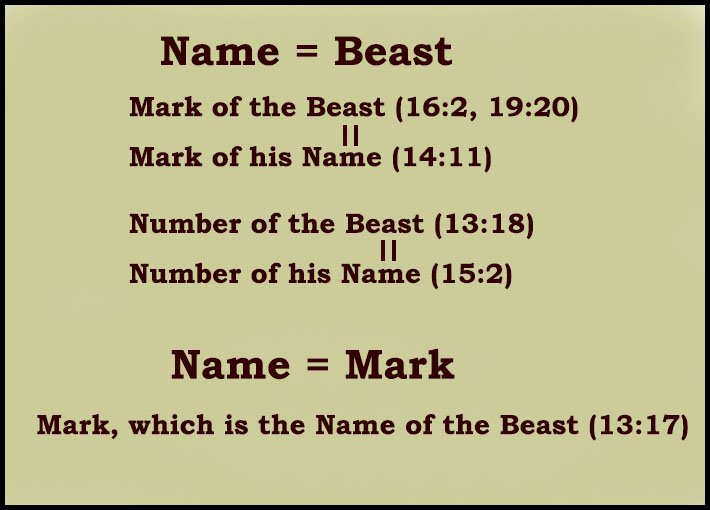 It is true that we often equate a person’s name with the person himself. For example, the name of Christ carries great power and influence. Jesus doesn’t materialize and manifest Himself to us in the way He did to His original followers. But His Name is real enough that we can choose to receive Him via His Name, and that is sufficient. (John 1:12) In fact, the Name itself is so powerful that we can even exercise power and miracles through it.

There is a difference between what a person’s name represented in Old Testament times and what a name means today. In our time, someone’s name is generally a label that identifies and distinguishes them from other individuals. In the past, people understood a name to be much more than that—a name often described the character or reputation of a person. At times we find that God changed someone’s name when they were given a new role, in order to more accurately describe them in their new position or responsibility. [Peter Amsterdam from Living Christianity series]


And in the New Testament the Greek word for “name” – onoma – besides its normal usage for proper names, has this very common secondary meaning:

“By a usage, chiefly Hebraistic, the name is used for everything which the name covers. . . one’s rank, authority, interests, pleasure, command, excellence, deeds, etc.” (from Thayer’s Greek-English Lexicon of the New Testament, pg. 47).

So, the ancient word for “name” had this extra dimension of meaning, and to some extent our modern languages have it as well. The “name” of someone can be influential, just as his personal presence is influential; but a “name” is not something tangible; it requires some kind of concrete symbol. For example, a king’s messenger might bear the king’s seal on the documents he is carrying, or he might have some other means of identifying himself; and this would guarantee him protection and respect wherever he might travel.

Thus, the “seal” (for God’s people) and the “mark” (for the Beast’s people) serve as the tangible means of transferring onto individuals the intangible power and authority (or “name”) of the higher power (of God and the Beast respectively). So, the term “name” in Revelation 13:17 stands for the Antichrist’s domain of influence and authority. For this reason the “name” and the “beast” are pretty much synonymous. And the “mark” (which allows people to partake of the Beast’s power) is also synonymous with the “name”: “the mark, which is the name of the beast”. (13:17) Thus, a simple formula:

To further illustrate, let’s say you are working in the IBM company as a janitor. If you wear the company’s identification badge on your shirt, then it identifies you and makes it easier for you to do your work, and even gain access to certain privileges that non-company people couldn’t have, such as using the staff lounge, let’s say. But if you refuse to wear the IBM badge, then there is no way to identify you as a bona fide employee. There’s no tangible manifestation of your membership in the huge entity known as IBM. No matter how big IBM’s “name” may be, it won’t do you any good unless you wear their logo, which represents the “name” of the company. But wearing it brings acceptance into the company and certain privileges.

Similarly, receiving the “mark of the beast” is the same as bearing the “name” of the beast and brings with it acceptance into his “company”, the soon-coming world economic system. Refusing to receive the mark then means you’ll be thrown out of the “company”. You’ll be a castaway – ejected from the world market system.

The important feature about a “name” is that it substitutes for the person himself, and it can go where the person himself cannot go. Now in the realm of the Beast, what can his “name” do? Remember, the Antichrist is supposed to be the head, or figurehead, of a worldwide economic system. But he can’t himself be standing at the checkout counters to distribute goods to the people or be the policeman to check on them to see if they’re loyal to him or not. But that is something his “name” can do. It’s that extra-dimensional aspect that is able to multiply the Antichrist’s influence and carry his authority and protection and benefits far and wide to every person in the world.

But a “name” is an abstract entity; so it needs, as it were, a device which can effectively transmit that power. And that’s what the “mark” is for. This amazing little device (a microchip? a tattoo?) will not only identify its bearer as such-and-such follower of the Beast, but also serves as everyone’s man’s personal bank teller or electronic wallet.

And those who don’t have the “mark”, they also will be identified, thanks to the computer data bases nowadays that seem to keep track of everything and everyone. In times past, a person who didn’t want to show allegiance to a demagogue had a better chance to slip by unnoticed. He could even make a false show of allegiance. But when the mark comes into force, it will be impossible to do that.

Receiving the mark is a type of initiation rite, which means a permanent commitment to the Beast and his system. If you don’t show your loyalty by performing the initiation rite, then you automatically stand exposed before a vast computer surveillance network as one of those who has refused to worship the Antichrist.

And to trace your whereabouts, in the highly computerized society of modern times, will be fairly easy. But not absolutely so. God will surely have some tricks up His sleeve that will enable His people to escape the all-seeing eyes of modern means of scrutiny.

In primitive societies a person might decide to leave his tribe for some reason. He might cast aside then whatever ornaments or talismans that marked him as a member of that tribe. Probably this kind of thing happened a lot in the early days after the Flood as tribes journeyed into different parts of the earth. In those days there were plenty of open spaces and virgin territory to migrate or flee to.

Nowadays, the circumstances are different, and to leave the “tribe” of the Beast won’t be so easy. Nevertheless, we do learn in Revelation, chapter 12, that “the woman (symbolic of God’s people) fled into the wilderness, where she has a place prepared by God. . . where she is nourished. . . from the presence of the serpent.” (12:6,14 – NKJV)

Daniel 8: Bridging Past and Future (4)