9 – Birth of the Barcode

This calls for wisdom. If anyone has insight, let him calculate the number of the beast, for it is man’s number. His number is 666. (Revelation 13:18)

So far, much attention has been given to the “mark” and its significance. But now, how does the “number” fit into the upcoming economic system? Well, one way it fits is, it’s already here!

And where? In the barcodes we see every day imprinted on almost every item we purchase.

Some might dispute this assertion because the point-of-sale computers in shopping markets don’t actually read the code as 6-6-6. But our human eyes do read it that way. Anyway, after considering the following explanation, the reader can decide for himself whether or not barcodes, with their apparent 666-number, fulfill the ancient prediction in Revelation 13:18 about the “number of the beast”. 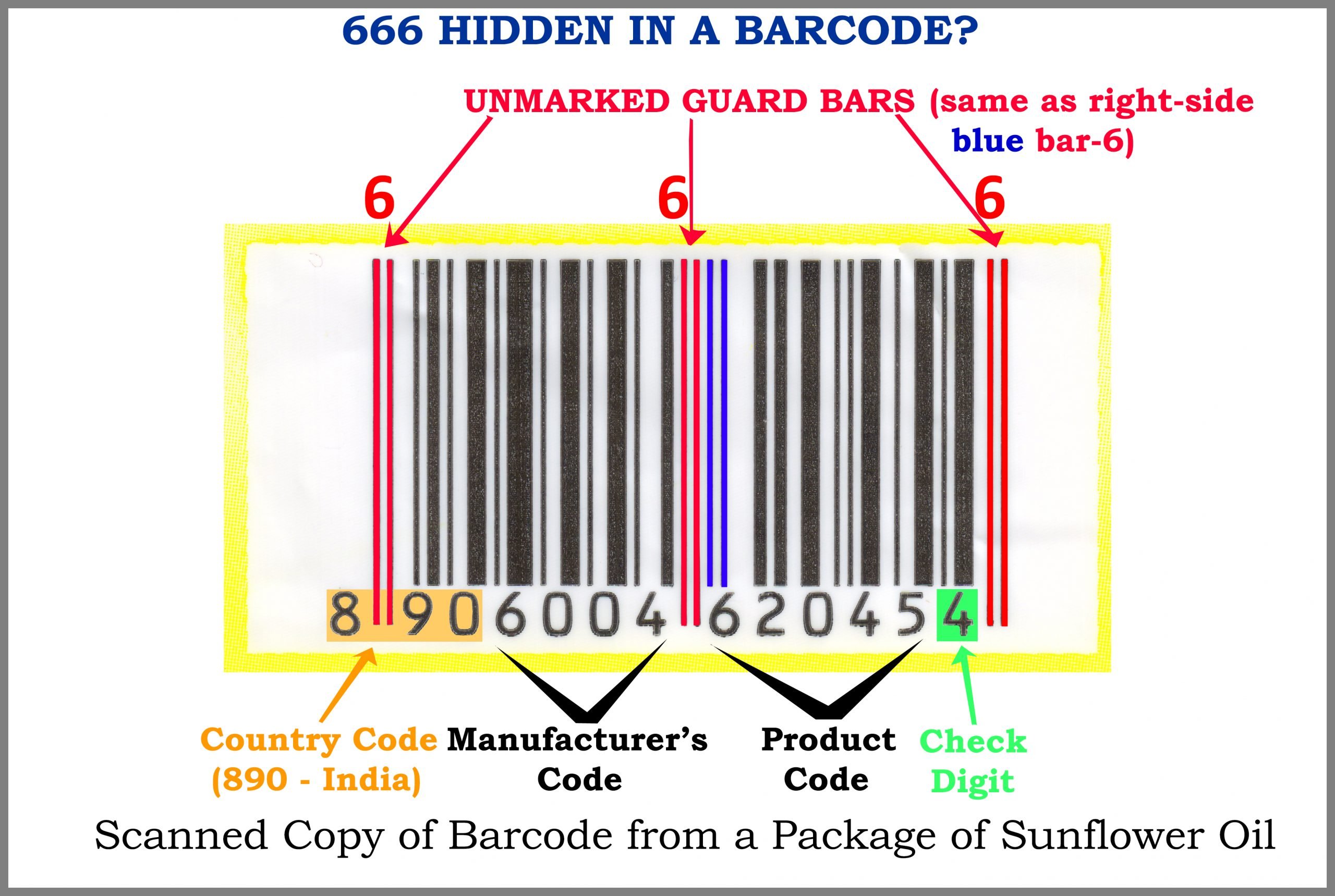 Manufacturer Codes are maintained and assigned by the Uniform Code Council (UCC). Every product the manufacturer makes, carries the same code.
Product Codes are numbers that the manufacturer assigns for its particular products. Every different product and every different packaging or size, gets a unique product code.
In the above example, 6004 is the Manufacturer Code for Mother Dairy Fruit & Vegetable Pvt. Ltd., while 62045 stands for one of its products, “Dhara Refined Sunflower Oil”.http://https//endtimeupgrade.org/wp-content/uploads/2015/08/Dhara-sunf-oil-1-scaled.jpg

And what about the price? That is not in the barcode but is kept in a store’s centralized computer database. When the item is scanned, the point-of-sale computer reads the barcode and links the item to the store’s “item database“; it then retrieves the price from the “item database”. When a price changes, all the store has to do is update it in the store’s centralized database.

Notice also that the labeled 6 on the left side is different from the labeled (blue) 6 on the right side. This is because the numbers on the left-hand side (the Manufacturer Code) are coded differently to the numbers on the right-hand side (the Product Code). However, the three guard-bars follow the right-side coding. These represent the hidden 6-6-6 number.

Most of the bar codes used in retail stores have this pattern in them that looks like 6-6-6; there are other versions (usually local varieties or those with specialized uses). But those barcodes designated as “worldwide retail, GS1-approved – International Standard” all have the 6-6-6 pattern; they are in general use internationally for most shopping items, even in less technologically advanced nations. Although there are different variations of these “worldwide retail” barcodes, they all have this peculiar set of guard-bars in them. And their function is to enable a scanning machine to read the barcode. Although they are not interpreted by a shop’s computer as numbers, to our human eyes they look like 6-6-6. (More on this later.)

The inventor of the UPC barcode was an employee of the IBM company, a Mr. George J. Laurer. Because of the large number of items passing through grocery stores, a new method was sought for that could speed up the check-out counters and eliminate “human” cashier errors. Mr. Laurer explained how the barcode invention was developed in his article “Development of the U.P.C. Symbol”. (See Appendix below.)

And that is the story of how the UPC barcode has become an entrenched feature worldwide in the market places of most nations in today’s world. The number 666 is quietly “hidden” in every barcode in almost every product we buy. And without the UPC barcodes, very little can be bought or sold.

Appendix: Excerpts from “Development of the U.P.C. Symbol” by George J. Laurer

About 1970 McKinsey & Co. (a consulting firm) in conjunction with UGPCC (Uniform Grocery Product Code Council, a corporation formed by the grocery industries leading trade associations) defined a numeric format for product identification. A request was made to many companies to make a proposal of a code, a symbol incorporating the code, and specifications for both. . .
Most of the other companies had optical codes and scanning equipment in the market place already. IBM did not. Therefore, in 1971 I was given the task by IBM management to design the best code and symbol suitable for the grocery industry…
In May of 1973, IBM’s proposal was accepted. . .
Later U.P.C. developments:
Following the acceptance of the original U.P.C. specification, I was asked to find a way to add another digit. The symbol already held twelve, the eleven required by UGPCC and a check digit I added to achieve the required reliability. . .
The extra digit would allow for “country identification” and make the U.P.C. world wide. Again I found a way to accommodate the requirement and the EAN (European Article Numbering system) symbol was born. Many countries are using the same symbols with their identifying “flag” (the 13th digit), but chose to call the symbol by other names. An example is JAN (Japanese Article Numbering system), the Japanese version. The symbol has truly become world wide.
In the years since 1973, I have proposed, and the Uniform Product Code Council, Inc. (formerly UGPCC) has accepted several other enhancements. Among those enhancements is a price check digit for domestic and another for European markets. . .