Part 1: THE WORLD OF PREHISTORY

1-A: Unusual Creatures and Environment
1-B: What about Human Beings in the Age of Prehistory?
1-C: Origin of the Prehistoric Environment and Cause of its Disappearance


1-C: Origin of the Prehistoric Environment and Cause of its Disappearance

Scientists generally acknowledge that the environment of the prehistoric world was very different to the environment that we live in today. And this begs for an answer to certain questions about how and why things were so different:

1) How was it that the prehistoric environment was able to support the growth of such large versions of plants, animals, and even man?

2) What was it about the weather that allowed plants and animals that today inhabit only tropical areas to thrive even in the polar regions of that mysterious world of ancient times?

3) Whatever happened to cause the disappearance of all these strange creatures that used to roam the earth?

4) Did the earth experience some great cataclysm in the past?

Since we in modern times weren’t there to witness what the earth was like back then, is there any record from ancient times times that might at least give us the basic understanding we need? A good detective might suggest to check out the ancient

After all, even if there were no scientists around at the time, the Creator was, and certainly He knew what took place. And the people who were living in those prehistoric days would also have some idea. We don’t have much of an idea because we weren’t there. But a major “lead” that can put us on the right track towards unraveling the mystery appears in the passages below; they contain an important “clue” to help us solve this great mystery of the prehistoric world’s strange environment. In particular, this ancient passage describes for us the kind of atmosphere and “waters” the earth had long ago in the very Beginning of time.

“Let there be an expanse [atmosphere] between the waters to separate water from water.”

And it was so.

suggests the existence of a double-layered atmosphere:

“Svah” being the upper layer above “Bhuvah” (airspace), while “Bhuh” is the earth below.

“The water under the expanse (atmosphere)” would, of course, represent the oceans, lakes, and rivers of the earth. 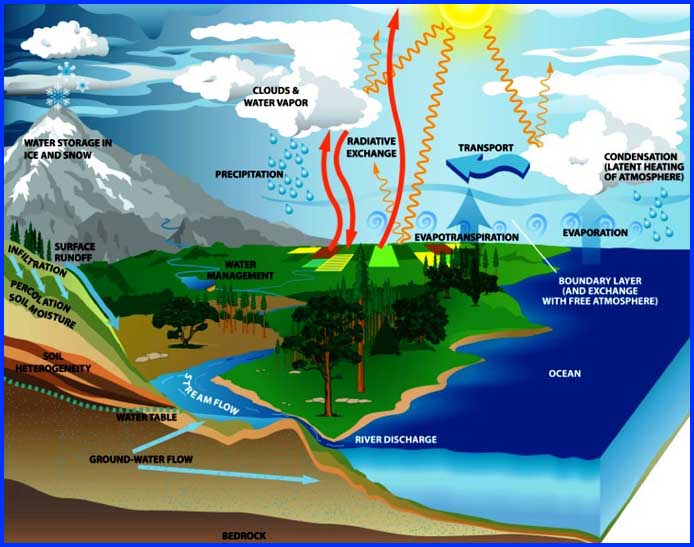 But what does it mean by the “water above the expanse” ? In the present day there exist water vapor and

clouds of condensed vapor up in the sky, but these are located in the atmosphere rather than above it. In prehistoric times, however, it seems that Earth was surrounded by a shroud of water, or water vapor, at a very high altitude above ground level.


Is this possible? In our present atmosphere, the stratosphere section of it is quite cold. However, beyond that region (in the thermosphere) the temperature becomes very hot, well above the boiling point of water. And this is where Earth’s atmosphere is capable of harboring a tremendous “ocean” of invisible water vapor. This “ocean” of water vapor is not there now, but according to the Genesis Book, it was there and was an important feature of God’s original creation. 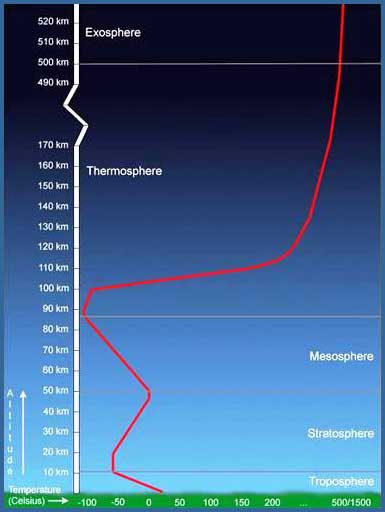 In the upper reaches of the atmosphere (thermosphere), the temperature rises to well above the boiling point of water. This region of the atmosphere could easily have sustained a huge “ocean” of water vapor, as part of the original Creation.

Of course, it is impossible to travel back in time to verify what the earth was like back then. But as we continue, we shall see how the above explanation helps us to make sense of the evidence that we see today in the fossils and rocks, and in our present climate. 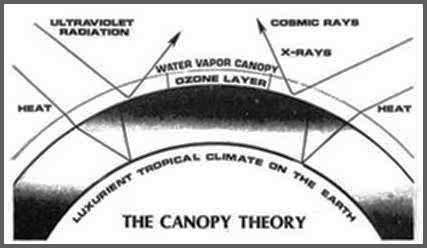 With higher air pressure in the atmosphere, it is easier to absorb oxygen. Such conditions enabled plant, animal, and human life in those early days of history to grow much larger and live much longer than today. More oxygen also gave the muscle strength needed to enable huge animals, like some of the dinosaurs, to move themselves easily, whereas in today’s environment it would be very difficult.

In addition, a denser atmosphere made it possible for the large flying creatures, like the pterodactyl, to fly. In the thin atmosphere of our present environment, it might be very difficult.

In a groundbreaking experiment, scientist Dr. Baugh, founder and director of the Creation Evidence Museum in Glen Rose, Texas, recreated these conditions in the laboratory. In a specially constructed biosphere, he was able to duplicate the atmospheric conditions of the ancient past and observe the startling results: fish and insects grew to giant size! 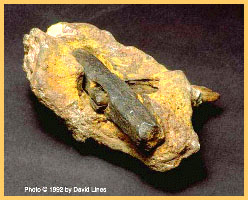 “The London Artifact is a hammer, probably used for fine metal working judging by its size, weight and the ends of the head. It was found near London, Texas, near a waterfall in 1934. The rock of this area is dated geologically as Cretaceous (144 Million to 65 Million years old), or during the time of the dinosaurs. [Does that mean the dinosaurs were very clever and made this tool? Or does it mean the belief in long ages of prehistory before the arrival of mankind is mistaken? More explanation on this point will come later, but suffice it to say for now, there is plenty of evidence to show that mankind was alive at the same time as the dinosaurs … in the pre-Flood age.] Besides being a fascinating find, the metallurgy of the hammer is remarkable: Good, high quality metal with no bubbles or slag and a bizarre compounding of 96% iron, 2.6% chlorine and 0.74% sulfur. A cut was made into the corner of the head to verify it was metal. Sixty years later, that cut (shown also on this replica) has still not rusted! When you compound chlorine with iron you get a powder etchant – not tough steel!
“What is this artifact doing in rock so “old” and how did the people who formed it make it the way they did?” [A denser atmosphere would have created the conditions needed in this process of creating “tough steel” out of these materials.]
(by Ian Juby, director of the Creation Science Museum of Canada)

Since no was one around at the time to scientifically observe and verify the fact, how can we scientifically figure out that a great water vapor canopy once surrounded the earth? Like a detective, we must observe the evidence and ask questions:

Question: How was it that the plants and animals were so much more robust than those of today?
Answer: Without as much protection from the Sun’s harmful radiation (cosmic, UV, and X-rays), the plants and animals in our present environment cannot grow as large or live as long as they used to when the Earth was surrounded by the water vapor shield that existed at the time of the original Creation.
Question: How can such large birds fly?
Answer: A denser atmosphere ⇒ easier to fly. (Wings have more to push against.)
Question: How can such large land animals move themselves?
Answer: A denser atmosphere ⇒ absorb more oxygen ⇒ more muscle strength
Question: How would the atmosphere be more dense?
Answer: A great shroud of water vapor around the earth would cause this effect.
Question: What happened to this great “ocean” of water vapor?
Answer: God caused it to collapse and flood the world.
Question: If that is true, is there any evidence of it?
Answer: The same fossils and rock formations that present us with evidence of what conditions were like in the prehistoric age also present startling evidence of a great worldwide Flood.

Continue to Part 2: Has the Earth Already Had an “End Time”? Cataclysm of the Great Flood

UNRAVELING THE MYSTERY OF THE ABOMINATION (2)