2: DUAL NATURE OF THE EMPIRE

Now let’s get down to business with this study and consider first an unusual and outstanding feature  of the Antichrist kingdom: its dual nature.

In the course of outlining future history, the Daniel and Revelation books speak of a future “beast” who was to rule the world in its final days before the second coming of Christ. This Beast symbolizes a powerful empire and its ruler who is often referred to as “the Antichrist”. We can say further that,  instead of just one main superpower controlling everything, two powerful regimes operate together to comprise this final kingdom.  Following are some indications in the Scriptures that point towards this future historical reality:

So, this dual End Time kingdom was predicted, it seems, in the Bible. And in this way it resembles the dual empires of the past: ancient Rome was split into East and West Rome, and the Medo-Persian empire was the union of two nations, Media and Persia. The Bible actually portrays the dual feature of these empires in symbolic form in the Book of Daniel, chapter 2 – as “arms of silver” and “legs of iron”.

These were components in an awesome-looking “image” that appeared in vision form to king Nebuchadnezzar and the prophet Daniel  – an easy-to-understand illustration by which God portrayed in almost child-like terms an enormous subject: the future panorama of human history from Daniel’s time to the present and beyond. This ingenious projection into the future reveals the progression of empires that were to control Israel (and much of the world). And it starts with Babylon, the superpower that controlled Israel in Daniel’s day.


As shown in the illustration below, the different body parts with their metals symbolize different empires that came along during the course of history. And it’s a simple picture – that is, until we get down to the empire of the “feet”.

At this point, it becomes complicated: there are two “feet”; there are also two materials (“iron and clay”) that “mingle with the seed of men”; they “mix” with each other, yet “will not adhere to one another”. (Daniel 2:41-43) Well, we live in a complicated age, and human activity has become far more diverse and wide-ranging than it was in ancient times. So it’s not surprising that this final part of Daniel’s vision seems to reflect the complex nature of modern times. 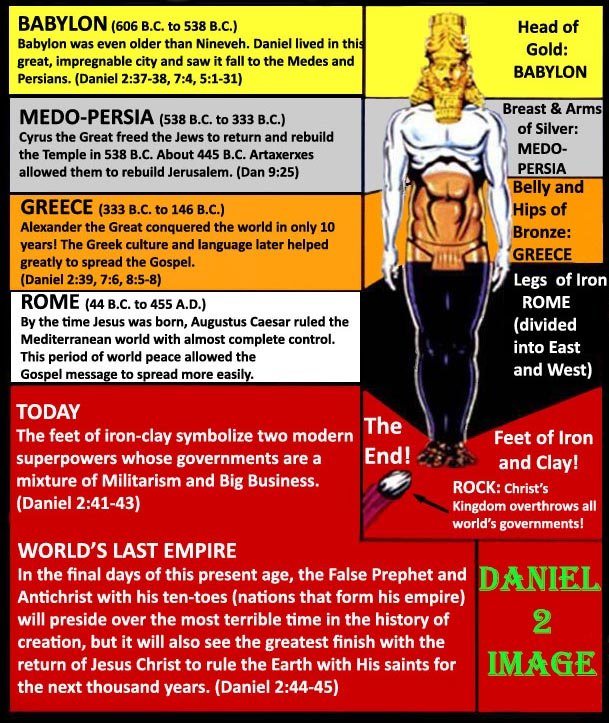 The diagram above (adapted from a publication of The Family International) illustrates the vision in Daniel chapter 2 of a “great image”, symbolic of upcoming empires.
(To understand more fully the meaning and symbolisms in the above diagram, a video presentation by Marc McMillion is recommended here.)

Continue on to 3: Spiritual and Physical Geography