[Scripture references are from the New King James Version, unless noted otherwise] 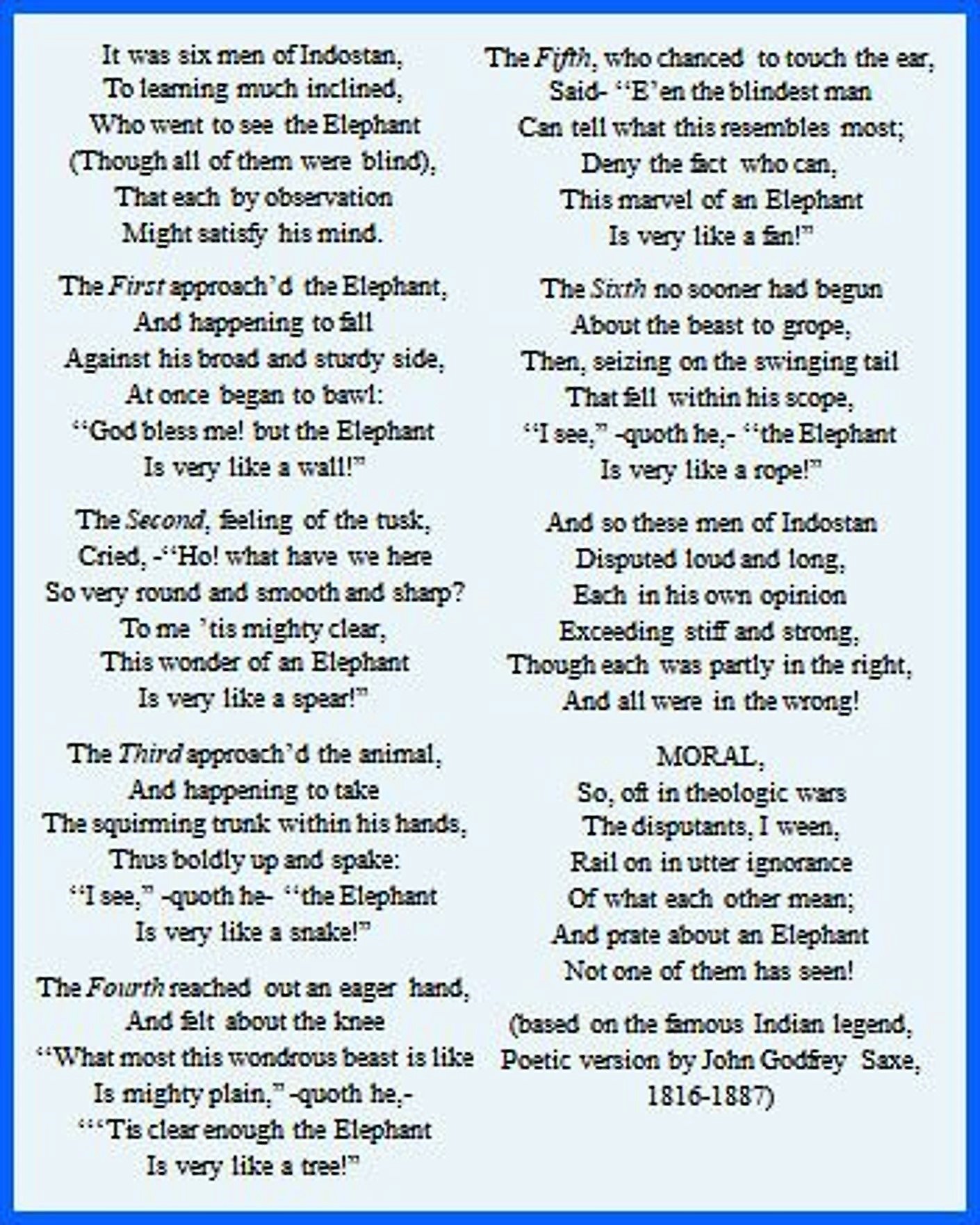 When it comes to interpreting what the Bible says about the future, it is easy to fall prey to what happened to the “blind men of Indostan”. For we are already “blind” to some extent, simply because the predicted events haven’t happened yet. Or at best we see only a dim outline, and we grope around, guess, and try to come up with reasonable explanations.

What helps in this kind of business is to see the whole “elephant” – that is, get the general, overall picture. Then the specifics, and their relationship to each other and to the whole, will fall into place more easily. What we want to avoid is the tendency to grab ahold of one aspect and insist on visualizing the “elephant” on the basis of that one feature only.

Since many predictions in the Bible concern the near future of human history, that certainly makes them a subject worthy of our attention. That doesn’t mean to say that the conclusions brought forth here in this particular study are all correct. But hopefully, if nothing else, some small advancement in our understanding of what the Sacred Book is trying to tell us about our future and present day historical conditions may come out of it.

For prophecies that are in the process of being fulfilled, usually they’re difficult to understand. With already fulfilled prophecies, we have the benefit of hindsight. But for prophecies about our modern day, it can be a tricky business trying to figure out how they’re supposed to apply to historical reality. And here is where it pays to steer clear of the kind of “theologic wars” that the blind men encountered in their discussion about the elephant that they couldn’t see in full but could only see in part.

Along this line, it helps to keep in mind that some prophecies aren’t even supposed to be understood until after the fact. They are only intended to inspire our faith in God’s power and foresight. “And now I have told you before it come to pass, that, when it is come to pass, ye might believe.” (John 14:29) In other cases, they satisfy our curiosity and give us hope for the future.

And lastly, they can serve the purpose of preparing us for what’s coming. We may see ahead rather dimly, but at least the future isn’t a total mystery. We can see something, usually because the prophecy has already been fulfilled partially, and we have a bit of historical hindsight to go on. And this helps us to see the “elephant”. It may be just a shadowy glimpse, but hopefully, that will be enough to safely expand and clarify our conceptions of what the ancient Scriptures have been trying to tell us all along about the present and near future.

Note: The following study presupposes that the reader has some basic knowledge of certain portions of Scripture, especially the chapters of Daniel 2 and Revelation 13. If you are not familiar with them, then it may be helpful to go over those two chapters before going any further.

Continue on to Chapter 2: Dual Nature of the Empire