These two visions of Daniel 2 and Revelation 13 (mentioned in the previous post) give us a basic outline of the dual nature of the final empire and how it will appear: physically, as a union of two geographical territories; and spiritually, as this post will try to explain, as the union of two spiritual regimes (or, as will become clear in upcoming posts, as the union of demagoguery and materialism). (For more background, see Appendix 1: Modern Religions, Cultures of Darkness.)

For example, the nation of ancient Greece possessed a very strong culture; it definitely had a strong “spiritual geography” – its pantheon of gods, its interest in philosophy, literature and the arts. Until Alexander the Great came along, Greek culture was confined to the borders of Greece. But as the Greek armies swept through the Middle East, Greek religion and culture also swept through, expanding to the limits of her newly extended borders.

This division between physical and spiritual geography that we can observe in the world is similar to what the vision of the “image” portrays: that is, there’s a difference between what the body parts symbolize (the more obvious, physical attributes of geography and chronology) and what the materials of the image symbolize (the more hidden features of the different regimes, their type of rule and influence, what we might call the inner dynamics of how they operate – the special nature of their political and religious systems).

For example, in speaking about the “iron” part of the image, Daniel states, “The fourth kingdom shall be strong as iron.” (Daniel 2:40) Its impact or influence upon the world is described thus: “Inasmuch as iron breaks in pieces and shatters everything: and like iron that crushes, that kingdom will break in pieces and crush all the others.”

So, the material of iron relates to more intangible features – the character, nature, and influence of the fourth empire, not its more obvious features of geography and chronology. This “fourth kingdom”, Rome, did indeed possess the characteristics of “iron”: a strong, well-organized, military regime that subdued the ancient world in a very thorough manner.

Besides this administrational aspect, the materials of the “image” also seem to reflect the nature of religious influence of the succeeding regimes. As noted earlier, the empires were symbolized by different types of metals, which seems to reflect their strong, authoritarian influence in the world. A natural outcome of this authoritarianism was their practice of emperor worship of one kind or another.

The fact that the vision was that of an image suggests this religious aspect. And the fact that it was the image of a person suggests, in particular, that the vision was illustrating the religion of emperor worship that has persisted throughout history, which nowadays would be called demagoguery. (Daniel 3 offers an example of how this use of an image for emperor worship was carried out in ancient times.)

In addition, the metals were graded according to value. This probably had something to do with how much influence the emperors in those kingdoms allowed God’s prophets to have, how receptive they were to God’s people and message in their kingdom or in their personal lives: for example, gold and silver symbolized Babylon and Persia; and indeed, some of the kings in those empires (Nebuchadnezzar, Darius, Cyrus, Ahaseurus) were yielded to God’s prophet Daniel and queen Esther. In fact, the Babylonian king Nebuchadnezzar was one of the rare examples from Old Testament times of a non-Jewish person entering into relationship with the Almighty.

Although these empires harbored some very strong religions of darkness, nevertheless, because of these kings’ influence, they became valuable by proclaiming throughout their empires that their subjects should honor the God of Israel; they also afforded protection to the Jews, God’s people of that time, and in the case of Babylon, needed chastisement.

The next kingdom of brass was made of a less fine material, but still valuable; Greece paved the way for Jesus’ coming through her language and philosophically-minded culture. She, in a less direct manner, pointed the way to the Lord. Her founding king, Alexander, was sympathetic to the people of Israel and left them alone for the most part during his military campaigns. Only later, under one of the Greek kings of the Seleucid empire did persecution arise against the Jewish people.

So, gold, silver, and brass are of finer caliber, and then comes the iron, the least valuable of the metals in the image. But unlike the other metals, iron does possess the virtue of strength, which is valuable in a different way. Rome’s political unity and extensive road system made it easier to travel and spread the Gospel in those early days of Christianity.

Other than that, however, most of the Caesars had little connection with or sympathy for God’s people in those days and became great persecutors of the Christian Church. As was the case in all the “metal” empires, emperor worship was practiced, and Christianity was perceived as a major threat to their religious system. . . until finally, Christianity became the official religion of the empire.

Conclusion: We have seen how the body parts of the image symbolize such obvious characteristics as physical geography and chronological sequence. The metal materials, on the other hand, appear to symbolize the more hidden features of the succeeding empires – their inner structure and working dynamics, and ultimately, their religious character.

Some years after his first vision of the “image”, Daniel had another corresponding vision in which he saw the same empires symbolized as “beasts” (“Daniel 7” section in the “Seven World Empires” illustration below). This next vision (in Daniel 7) links easily with John the Revelator’s vision of the two End Time beasts (in Revelation 13). 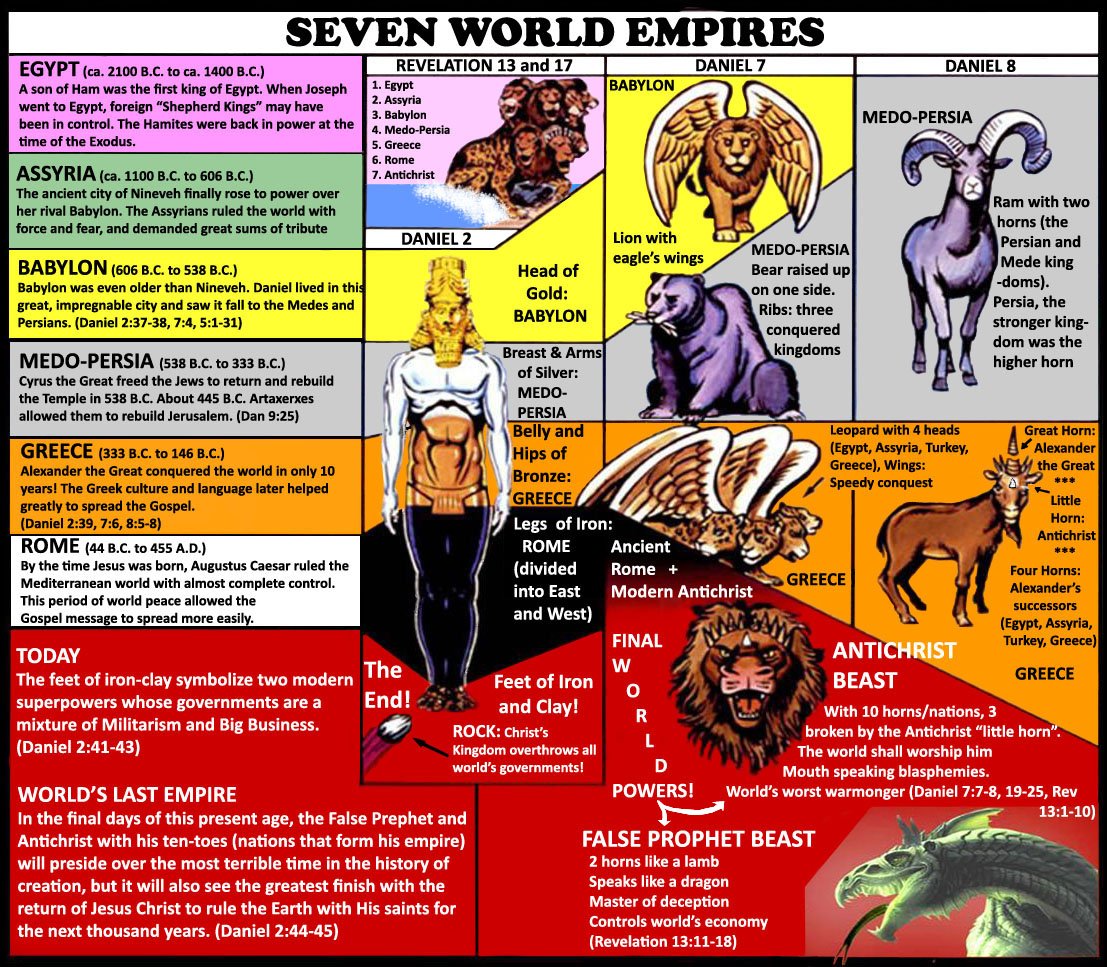 The diagram above (adapted from a publication of The Family International) illustrates the different visions of empires seen by Daniel the prophet in chapters 2, 7, 8 of the Book of Daniel and similar visions seen by John the Apostle in chapters 13 and 17 of the Book of Revelation. Interestingly, the different visions interconnect with each other and at the same time reveal peculiar features of the empires that came, or will come, to invade the Mid East area, and to conquer the nation of Israel.

(To understand more fully the meaning and symbolisms in the above diagram, the following links present some good explanations by Mark McMillion for Daniel 2, Daniel 7, and Daniel 8.)

One outstanding feature about these visions is this: the dual empires of Medo-Persia and Rome each corresponded to one “beast” only; each was a “beast” split into two parts. But in the End Time the situation is unique.

For it seems that not only will there be two geographical territories (symbolized by the “feet”), but this dual empire will be presided over by two “beasts”. (More explanation about these unusual features of the End Time empire will be discussed further on.)

To start, we could ask, what empires are symbolized by the two Beasts of Revelation 13. From the prophetic message in Ezekiel 38 and 39, we learn about a warlike figure called “Gog, of the land of Magog, the prince of Rosh, Meshech and Tubal” – all ancient names for places now in Russia – and he will come from his “place out of the far north” to invade the land of Israel “in the latter years”. (Ezekiel 38:2, 15-16. See “Ezekiel 38-39” series of posts for more information on this subject.)

As far as God is concerned, all the empires of human history became beast-like at some point in their history. But Russia, like the other Beasts mentioned in Daniel 7-8 and Revelation 13, will have that unique qualification of a Biblical Beast – namely, conquest of the Jewish people when they are gathered together in the Mid East. So it seems clear that Russia is the warlike sea-Beast of Revelation 13, the last one to come in earth’s history whose leader is referred to as the Antichrist.

Continue on to 4: Economic Superpower – The New Beast

Revelation 18: Fall of the Great Harlot (6B)