Previously, we learned that the image vision in Daniel 2 symbolized the dual empires of Medo-Persia and East-West Rome in the form of two arms and two legs. And we know there is one more dual empire to come along symbolized as the two “feet”. This was to be the last empire, for as the vision unfolds, it is during the era of the “feet” that Christ (symbolized as “a stone”) will return.

You watched while a stone was cut out without hands, which struck the image on its feet of iron and clay, and broke them in pieces. And the stone that struck the image became a great mountain and filled the whole earth. . . the God of heaven will set up a kingdom which shall never be destroyed. (Daniel 2:34-35, 44)

Although the meaning of this End of the Age portion of the vision is becoming clearer in recent times, there is still much that remains a mystery. To clear up some of that mystery, it may help to look at how those parts of the “image” that symbolized ancient empires found their fulfillment in history.

So, if the same rule applies to the final empire of the “feet”, then we should expect that it also will be divided into two geographical areas. (And the “iron and clay” would symbolize a dual spiritual geography.) 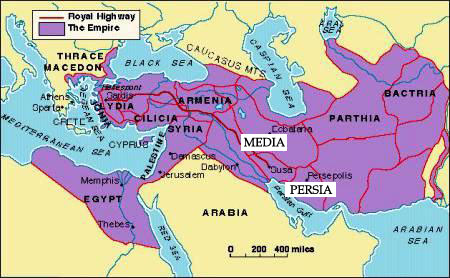 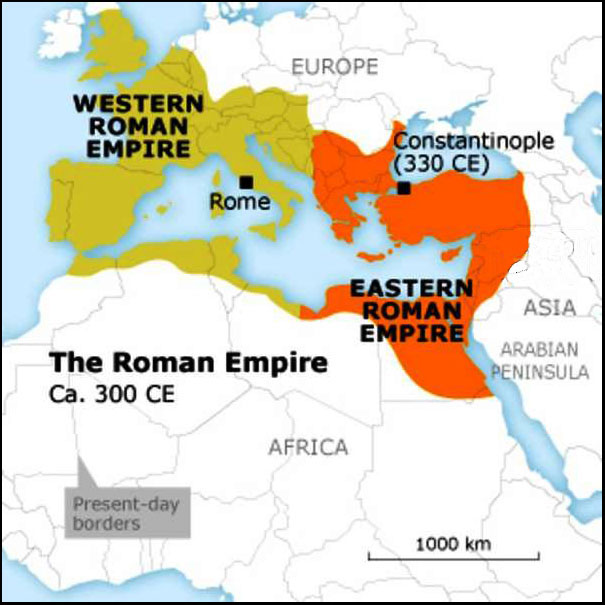 The following is somewhat speculative. But perhaps we could indulge in a bit of speculation, or (better word) exploration. Let’s explore then how the geographical shape of the future may unfold:

For centuries eastern and western cultures have been at odds and differed greatly from each other. And this could be why, in modern times, the Eurasian continent, despite being one large, single land mass, ended up getting divided into two parts – Europe and Asia. And is it not possible that long ago this peculiar division of the world was foretold (symbolically) as the two feet in Daniel’s vision of the image?

Furthermore, since a foot is part of the leg, we might expect to find some relationship between the Roman “legs” and the modern final-empire “feet”. Do the two legs of East and West Rome divide the world along similar lines – that is, between Europe and Asia, the two territories that are already starting to work together for economic benefits and for the purpose of resisting American influence. . . and ultimately creating the final empire of this Age?

“Europe” would include Russia west of the Ural mountains, along with much of the rest of Europe. “Asia” would include Siberian Russia, China, India, the Middle East, Japan, Indonesia, SE Asia. As for north Africa, some of those nations also will be conquered by or allied to the final empire (according to Ezekiel 38:5 and Daniel 11:43) – similar to their situation under ancient Roman rule.

And from the cultural point of view, the correlation appears to be even closer. The nations of West Rome during that ancient time were somewhat backward; as a result they quickly absorbed Roman culture and ended up speaking Latin. On the other hand, the nations of East Rome – Greece, Egypt, Israel, Turkey (Asia Minor), Iraq, Syria, Jordan – had been at one time or another advanced civilizations in the ancient world. Because of their entrenched culture, they were not so easily absorbed into the Roman empire; although they were under Roman rule, they continued speaking Greek and/or their mother tongues.

So here was a major cultural division that existed between West and East Rome. And nowadays, between Europe and Asia there exists today also a noticeable cultural divide. Europe, which includes now Greece, has a Christianized, western outlook. Asia, on the other hand, is different and is influenced by Muslim, Confucian, Hindu, and Buddhist philosophies and religion.

[By the way, whether a nation is “Christian” or “non-Christian” is not meant to be a value judgment. In the eyes of the Almighty, what matters is how closely a person’s or a nation’s actions and behavior match with Godly principles. Jesus taught that our duty in this life is to love God and to love others. Many non-Christian people (and nations) have a sincere love for God (in a general sense) and are behaving as well, if not better, than many Christianized people/nations.] 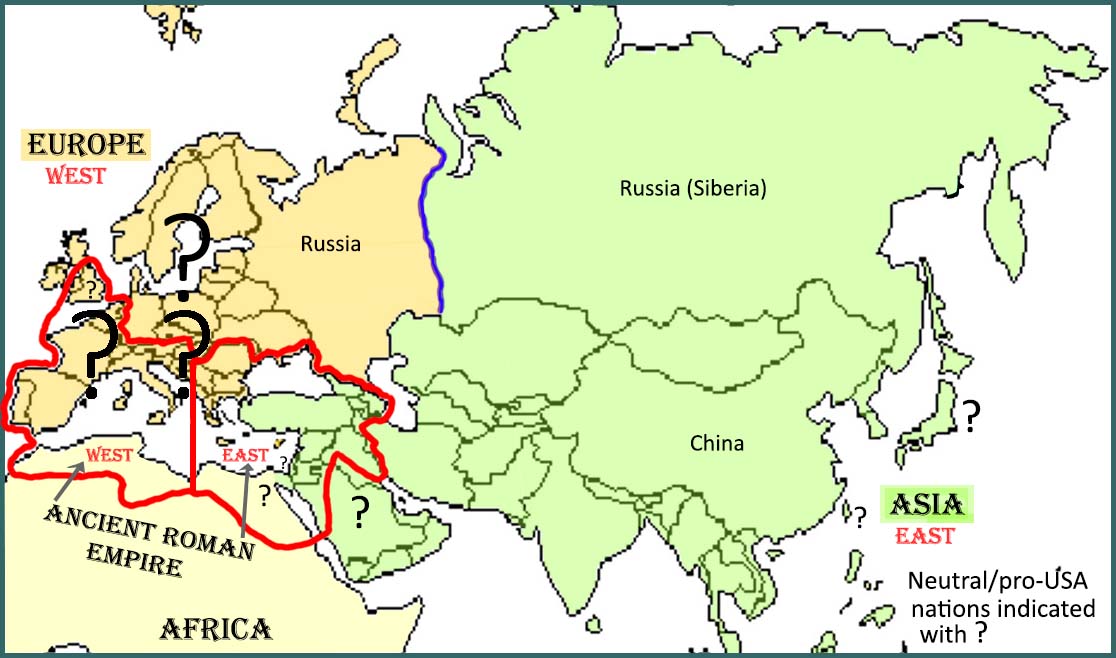 Getting back to the meaning of the two-feet symbolism, we note that the present day Europe-Asia combine contains many additional nations beyond the old Roman empire. But this accords with the symbolism: the foot is a different body part (different geography); it is only connected to the leg. To go even further with this leg-foot symbolism, the fact that the feet are more spread out than the legs could be symbolic of how the modern empire is like a spread-out version of ancient Rome.

And from the chronological point of view, the fact that the feet are shorter than the legs should symbolize the shortness of the final empire’s reign in comparison to the lengthy rule of ancient Rome. The position of the feet also tells us that this empire comes at the tail end of world history.

Hopefully, this is not overdoing it with the image’s symbolism; it is remarkable, though, how well it seems to fit the modern situation. (Related to this, the Appendix below explains how closely the ancient Medo-Persian and Greek empires fit into the symbolism of the image.)

Undoubtedly, some nations will choose to remain outside the new empire. And while it is foreseeable that several nations of the European Union will partner with Russia, Great Britain (and maybe others) will not. In fact, quite a few right now have been persuaded, against their own best interests, to join the American camp.

On the Asian side, the central Asian nations are on board, even getting their infrastructure upgraded in preparation for becoming a vital link in the Belt and Road Initiative. However, some Asian nations may choose to remain outside; Japan, Israel, and Saudi Arabia are entrenched in the American camp.


One peculiar feature about the feet: they are not one iron foot and one clay foot, but they are portrayed as being made of “iron mixed with clay”. (Daniel 2:41,43 – KJV) The next Post will try to shed some light on this mysterious feature of history’s final empire.

APPENDIX: How historical reality mirrors closely the  symbolism of the Daniel 2 “image“

A compelling reason to identify Europe and Asia as the two territories that comprise the final empire can be seen in the symbolic portrayal of the “image” in Daniel 2 and its uncanny correlation with the geographical and chronological nature of the Mideast empires.

For example, the symbolism for the empires of Medo-Persia and Greece shows respectively “arms and breast”, “belly and thighs”. (Incidentally, “thighs” should be translated as “haunches”, “hips”, or “buttocks”.) Between breast and belly, there is not much of a separation; they can almost be thought of as one body part. Not surprisingly, Medo-Persia and Greece seem to reflect this symbolism rather accurately; each one occupied almost the same territory as the other. 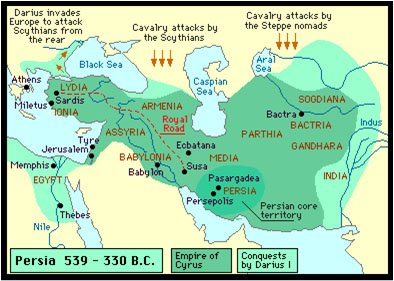 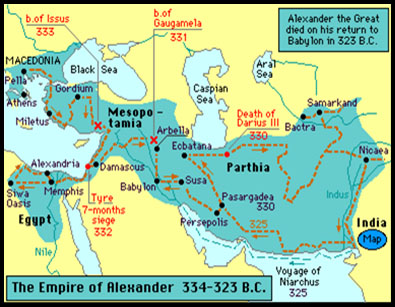 On the chronology aspect of the “image” vision: the long arms and legs symbolize rather well the long-lasting empires of Medo-Persia and Rome. (The arms and legs also correlate with the dual nature of those two empires.)

The first and last empires symbolized in the “image” are represented by the comparatively short head and feet. Babylon’s rule lasted only 70 years, and the final Antichrist empire will be even less: “he (the final Beast) was given authority to continue for forty-two months. . . and when he comes, he must continue a short time.” (Revelation 13:5, 17:10)

So we see how nicely the symbolism of the “image” fits the geographical/chronological nature of the ancient empires. Knowing this, it should be safe to assume that the Almighty, in His grand foresight, was able to cause the present geographical-historical situation to mirror, accurately enough, the symbolic portrayal given for it in this outstanding vision from long ago in the Book of Daniel.

Retrieving Our Lost Heritage (4B)

Fall of the Great Harlot (Appendix 1)