Besides all the evidence presented so far, the belief in a young age for the Earth also makes a lot of sense from the viewpoint of what we know about population growth:

It is estimated that in the century from 1910 to 2010 Earth’s population grew from 1.8 billion to 6.9 billion (increased by 383%). According to that rate of growth, if we work our way backwards mathematically – century by century – we would find that our present population began with only 2 people in 310 A.D.!

Of course, we know our present population could not have started in 310 A.D. But if you factor in certain things – like the lack of medical knowledge in days gone by – we can lengthen the time somewhat. So it doesn’t stretch the bounds of believability to understand that the human race began with 8 people (Noah and his family after the Flood) only a few thousand years ago … and some reasonable time before the Flood, another Beginning with two people (Adam and Eve) at the time of Creation.

What does stretch the bounds of believability is the conventional idea that mankind emerged from some primitive origin about 200,000 to 1,000.000 years ago. To have such a lengthy duration of population growth defies common sense. 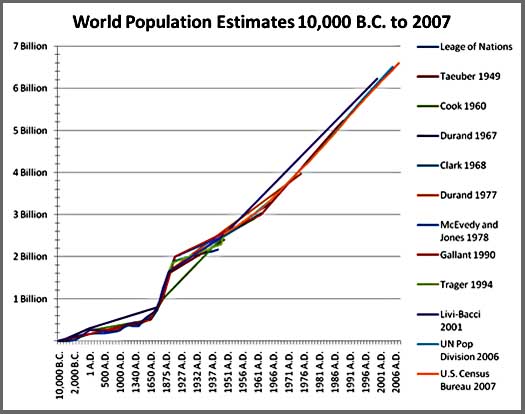 Many studies have been done by various people and organizations, including the League of Nations and the United Nations, but none of the population estimates stretch back any further than 10,000 B.C.

Retrieving Ours Lost Heritage (5B)