3-E: Early Migration Before the Rise of Civilization

A rather interesting, but little understood, era of past history has to do with the sons of Noah and their offspring and where and how they migrated into different regions of the earth. Much of this information has been recorded and preserved in the historical records and genealogies kept by tribes of Saxons and Scandinavians among others, and the Hebrews in the Book of Genesis, chapter  10, or in the sacred legends of many ancient peoples in different parts of the earth.

For example, In the Matsya Purana, a legend originating in ancient India, there is the account of a man named Satyavarman (or Manu) in whose days the whole earth was covered by water. He was preserved from the flood by building a boat and boarding it with his seven companions – his wife, his three sons, and their wives:

To Satyavarman [Noah], that sovereign of the whole earth, were born three sons: the eldest Shem; then Sham [Ham]; and thirdly, Jyapeti [Japheth] by name.
They were all men of good morals, excellent in virtue and virtuous deeds, skilled in the use of weapons to strike with, or to be thrown; brave men, eager for victory in battle.
But Satyavarman, being continually delighted with devout meditation, and seeing his sons fit for dominion, laid upon them the burdens of government…
Then he gave Sham the wide domain on the south of the snowy mountains [Caucasus Mountains].
And to Jyapeti he gave all the north of the snowy mountains; but he, by the power of religious contemplation, attained supreme bliss.

By studying the clues – such as the ancient writing above, or place names along their migration routes, or their languages, or archeological remains – historians have been able to trace where the various descendants of Noah went after the Flood, as outlined in the following brief summary:

Japheth is honored as the father of the European races. As such, because of the tendency in earlier times for people to engage in ancestor worship, Japheth became an object of worship in many cultures. In Roman mythology, for example, he was known as Jupiter, the chief of the gods. (See genealogy charts that trace the ancestry of ancient societies all the way back to Japheth in Post 5-E)

The sons of Japheth and where they went are listed below:

(1) Gomer: Went north to Ukraine; Crimea on the shores of the Black Sea derived its name from Gomer. His descendants went on to Europe – Goths in northern Europe, Gaul (now France), Galicia in northern Spain. The sons of Gomer:

Ashkenaz – The lands of Scandinavia and Scotland are thought to have been named after him as were the ancient tribes of Saxons and Scythians (of the Russian steppes).

Riphath – The Ural Mountains used to be known as the Riphaean Mountains.

(2) Magog: The descendants of Magog mixed with the descendants of Gomer, Meshech, Tubal, and Togarmah to form the numerous nations/tribes of Scythia, stretching over a vast area from the Caucasus Mountains and along the Black and Caspian Seas to eastern Siberia. In ancient writings these northern peoples were collectively referred to as Magog, or as Scythians. The highest of the Caucasian Mountains was called Mugogh; a people living on the Don River north of the Black Sea were called Magotis; the ancient Mongols (from Mongolia) are thought to have derived their name from Magog.

(3) Madai: Father of the Medes who settled in Persia (Iran) and merged with the Persians (descendants of another son of Noah, Shem) to form the Medo-Persian empire around the 6th century B.C. Before this time, a branch of Madai’s descendants had arisen called the Aryans (which is where the modern name for Iran came from). The Aryans entered India around 1500 B.C., bringing Sanskrit and Aryan culture with them, and mixed with the previous inhabitants, the Dravidians (probably descendants of either Shem or Ham). It seems that because of the common origin with their forefather Japheth (or Jyapeti in Sanskrit), the north Indian languages bear some similarities to the languages of Europe and are part of what is known as the Indo-European family of languages. 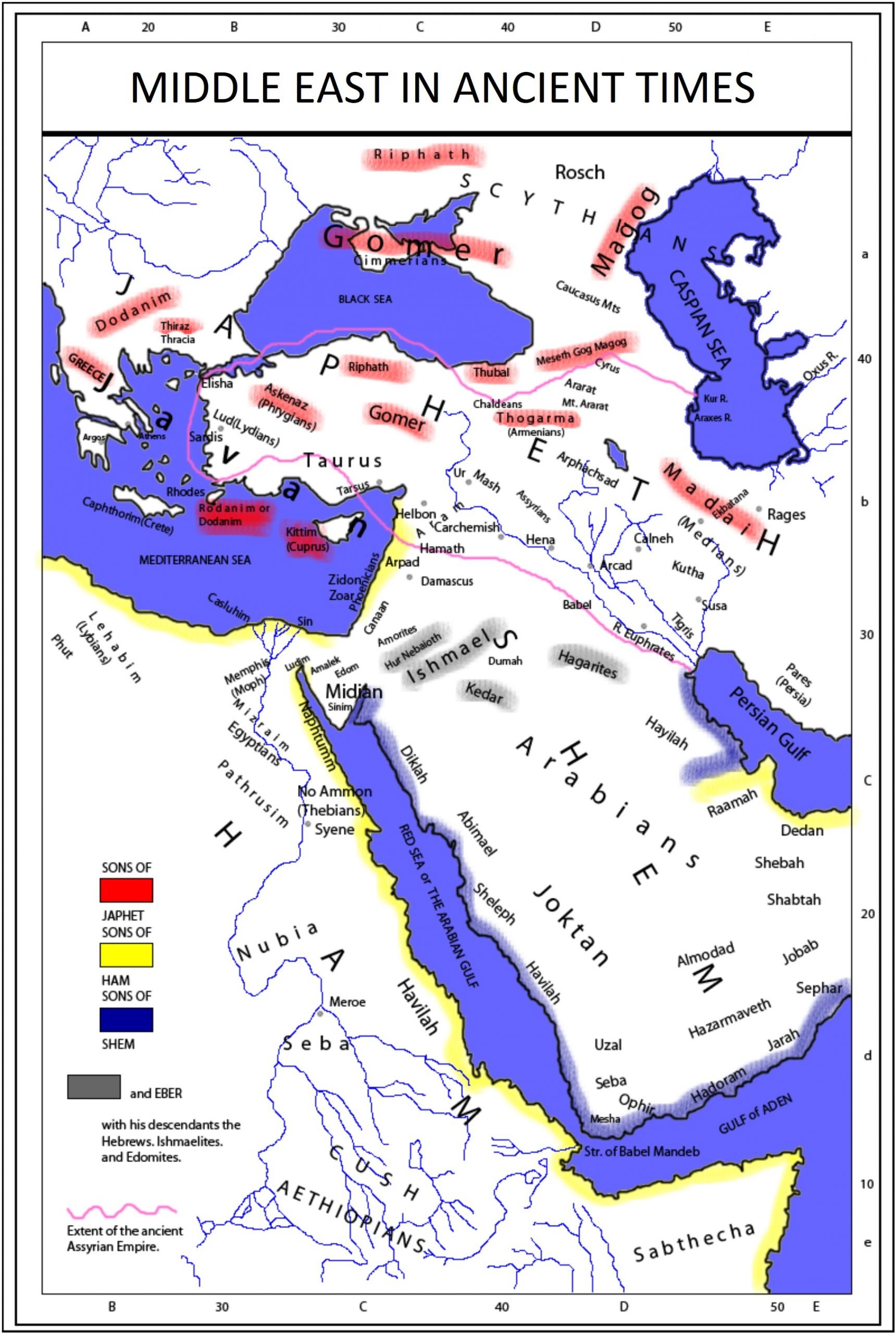 (4) Javan: In ancient times the land of Greece was called Javan. Sons of Javan:

Elishah – The Elysian Fields, the paradise of Greek legend, apparently was named after him.

Tarshish – Became a city in southern Spain and well known in the ancient world as the far western edge of the Phoenecian trading empire. The city had contact with Britain and other remote places.

Kittim – Settled in Cyprus which for centuries was called Kittim

Dodanim – Settled around the ancient city of Troy whose coastal regions were and still are known as the Dardanelles.

(5) Tubal: Some of his descendants settled in Siberia and gave Tubal’s name to the Tobol River and city of Tobolsk. They also migrated to Georgia whose capital city is called Tbilisi.

(6) Meshech: Often mentioned together with Tubal. Meshech’s descendants also went north and were known as the tribe of Mescherians near Moscow whose name is derived from Meshech. Maps often show these tribal names (of Meshech, Tubal, Gomer) located further south in what is now Turkey. Branches of these tribes did migrate from their northern homelands and settled in parts of what is now northern Turkey or other places in the north Mideast. But their primary regions of settlement were in the northern steppes of Russia.

(7) Tiras: The area of Greece known as Thrace, the ancient city of Troy (coast of NW Turkey), and the Taurus Mountains in Turkey are thought to have derived their names from Tiras.

(1) Cush: His descendants migrated to various places in the Mideast, especially Arabia, and to Black Africa.

(2) Mizraim: Also to the Mideast, but especially Egypt.

(4) Canaan: Settled in the land of Palestine. His son Sidon founded the city of Sidon, Lebanon, which became the center of the Phoenecian empire. Two others of Ham’s sons, Sin and Heth, or their desdendants, are thought to have gone eastward and founded the Chinese and American Indian races. (The ancient name of China was Sinim – Isaiah 49:12.) The other sons went to areas in the Mideast.

It is a little difficult to pinpoint exactly where everyone went, but this Table of Nations in the Genesis Book (chapter 10) does at least give us the starting clues. Tracing the pattern and routes of the early migrations after the Flood is a fascinating study and can be made a lot easier if it is based on this ancient record, and on other sources left by several ancient societies from those early days.

This early period of man’s history after the Flood and before the rise of the great civilizations has for the most part been shrouded in a great deal of mystery. Or confusion might be a better word. Because the idea is so deeply engrained nowadays that we are supposed to have evolved from a primitive “ape-man” status a long time ago, it has prevented scholars from even considering the possibililty that our present era of history could have had a definite starting point (with the people who survived the Flood in the Ark).

As a result we lack nowadays an accurate understanding of this intriguing period of time; it has lain buried somewhat under the rubble of modern misconceptions about the progress of history.

Unfortunately, modern scholars have tended to misjudge what really happened during those early days, because of their unwillingness to let go of the evolutionary model of history. Sadly, they have ignored and glossed over the important sources of historical information available to us, debunking them as fable or legend. If the academic world would only be more willing to acknowledge God’s role in history, so much of our mysterious past wouldn’t have to be so mysterious. Of course, it would soon come to light that the events, exploits, names of places, and movements of tribes can all be traced back to Noah and his sons. And perhaps this is what the academic world would rather not have to do – that is, admit that some of their information can only come from God and the sacred records that He has left for us to refer to.

It is worth noting, regarding the spread of civilization in the earth, that the first post-Flood inhabitants were quite advanced in their technical knowledge, having brought with them much of the accumulated wisdom gained during the pre-Flood age. Man’s overall storehouse of knowledge has increased, of course, since then, having been preserved and nourished among the great civilizations that have come and gone through history. (The Post “Writing and Technology: Did Mankind Start from Scratch?” has more information on this subject.)

In the early days of pioneering and repopulating the earth after the Flood, groups and tribes of people were branching off from established areas and migrating into distant corners of the world. Due to the distances involved and lack of communication with their former homelands, these new groups naturally weren’t able to keep all their previous knowledge and technology. As more and more groups splintered off from each other, it was inevitable that many new tribes of rather primitive cultures began to appear.

It is a common misconception in the study of anthropology that mankind started off in a primitive state and worked his way up from there to more sophisticated levels. But actually, it has happened more the other way round. The first settlers in the post-Flood world were quite civilized and advanced in their technology, and the primitive tribes did not show up until some time later. It was inevitable that technology levels went into reverse among those peoples who were unable to preserve it because of being too isolated or too small in number. Otherwise of course, the overall level of technology has advanced from what it was when Noah and his sons and their wives left the Ark.

Interestingly, many of the scattered tribes in the earth today still retain in their sacred histories references to the Great Flood and the Ark. This evidences rather well the fact that mankind had a common origin in the survivors of the Flood.

As for man’s progress since the Flood, it is debatable whether or not our level of civilization has truly advanced. Noah and his sons and their early descendants were likely quite civilized, peaceable, and knowledgeable in the ways of God, and from that point of view, it doesn’t look as though modern culture matches very well with how it was then, at least as it was in those very early days.

Continue on to Part 4: How Well Does Evolution Theory Agree with Scientific Principles and Discoveries?

Revelation 18: Fall of the Great Harlot (6A)