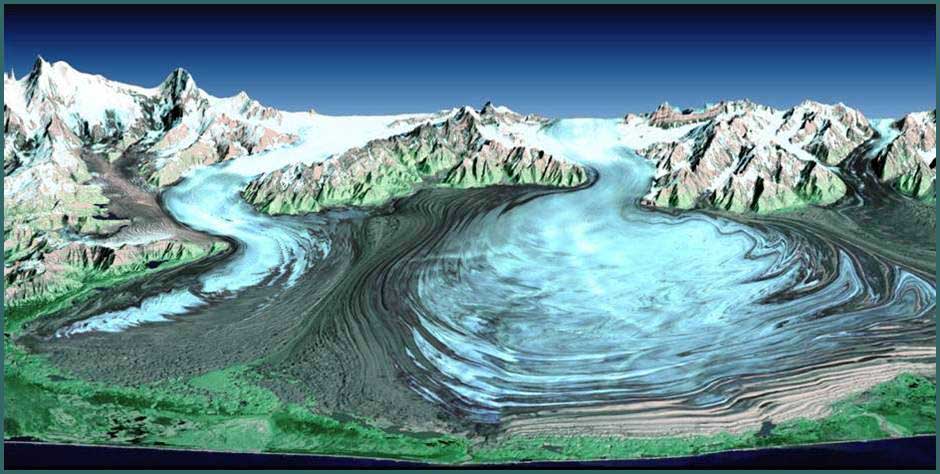 Malaspina Glacier, Alaska – Photo taken by satellite. When a glacier exits onto a plain, it makes this kind of formation.

Modern geology teaches much about an Ice Age or Ice Ages, occurring in times past. Generally, the theories have over-estimated the duration and extent of the Ice Age because much of what should have been understood as the action of the Flood waters upon the earth was mistakenly assumed to be evidence for ice action on the landscape. The kind of trail left by flooding and that left by glacial action can look similar, and it is easy to mistake one for the other.

At any rate Earth’s “Ice Age” did begin after the Flood and would have reached its peak at some point afterwards. But in a sense we are still in the “Ice Age” – at least when we compare how the climate is now with the milder, more tropical climate that existed before the Flood.

How the Ice Age came about has always been a great puzzle to scientists. Since cold air does not hold moisture very well, it is difficult to explain how there could have been enough precipitation to enable the tremendous build-up of snow and ice that happened during the Ice Age. How could the Earth have had just the right combination of water temperature, air temperature, atmospheric conditions, precipitation, and so on? But when we understand this era of Earth’s history in light of the Great Flood cataclysm, the vagueness and mystery surrounding the Ice Age’s appearance clears up quite easily.

First of all was the collapse of Earth’s protective shield of water vapor during the Flood. No longer were the polar regions able to retain heat as they had in pre-Flood days. Unlike the atmosphere and land surfaces, however, water retains its heat much longer. Thus, the oceans kept their warmth for quite some time after the Flood – which led to an excessive amount of evaporation.

At the same time the atmosphere was cool – not only because of the loss of Earth’s surrounding “blanket” of water vapor, but also because great clouds of volcanic dust were blocking much of the Sun’s heat. (There was, probably, much volcanic activity due to geological disturbances that released underground water onto the Earth’s surface; and later, after the Flood, the re-shaping of landforms to accommodate the floodwaters into huge ocean basins also caused volcanic activity.) In the polar regions of the Earth, this combination of circumstances would have resulted in a peculiar set of climactic conditions:

And a huge amount of it. This brought on a massive amount of snow and ice accumulation, which in turn produced the enormous glaciers and ice sheets that still cover much of the polar regions and higher mountain ranges in various parts of the world. It is thought that so much of the Earth’s water got locked up in ice form at this time that the ocean was actually 200 m. shallower and that the shorelines of earth extended to the edge of the continental shelves (which lay exposed then as dry land because of the “Ice Age” going on at that time in Earth’s history). 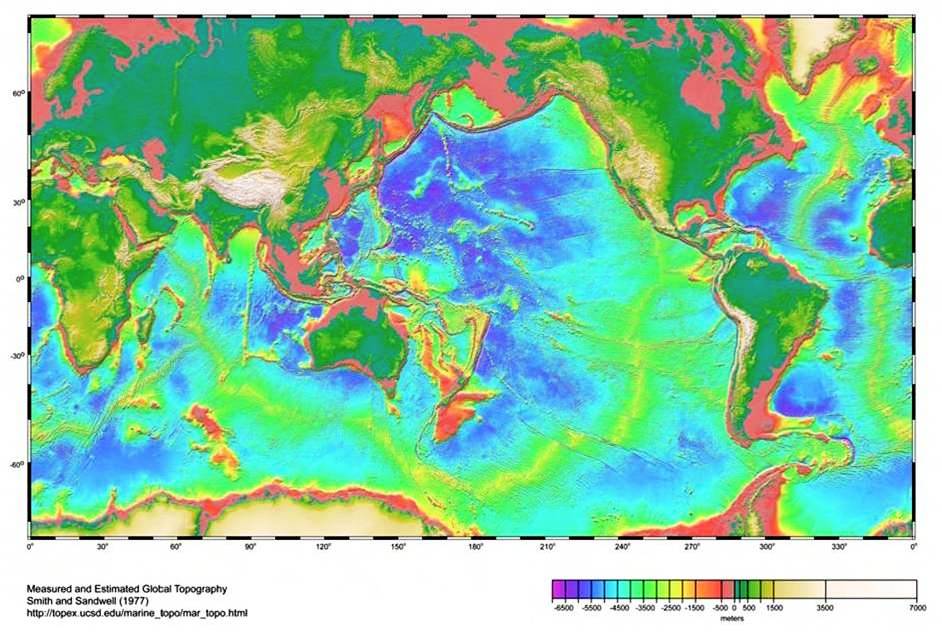 The climate during the Ice Age was rather peculiar. This was an era of transition as the environment adjusted to a new set of atmospheric and temperature conditions. For example, the climate in northern areas featured a sharp contrast: some regions were ice-bound and hostile; other regions at the same latitude experienced a relatively mild climate due to the effects of warm ocean waters.

There is much evidence that great herds of large mammals (such as the mammoth elephant) were roaming in northern areas during this unique era of transition in Earth’s history as the environment was adjusting and before it stabilized (more or less) into its present equilibrium.

Even nowadays we can see a limited version of this phenomenon of contrasting climactic zones existing side by side. For example, the coastal city of Vancouver, Canada, being not far from the warm Alaska Current, experiences much less snow and cold weather than other nearby areas that are further inland and elevated.


Eventually, towards the end of the Ice Age, the skies cleared of volcanic dust and more sunlight appeared. In addition, as the oceans began to lose their heat from pre-Flood days, there was much less evaporation. This combination of more sunlight and drier climate caused some of the great ice sheets that were covering much of Canada and other parts of the world to melt and recede.

During the post-Flood era there was less seasonal variation in temperature. This meant that snow and ice build-up from winter-time did not melt away during the summer. But with the onset of more extreme seasonal variation towards the end of the Ice Age, summers became hotter; and although winters became colder, the atmosphere became drier, which did not allow for much precipitation.

And the warmer drier summers in many northern areas led to catastrophic melting of ice sheets and glaciers; this in turn led to a rise in sea level and flooding. And it seems evidence of this can be found in legend (such as that of Atlantis) and in the underwater remnants of former seaside towns that had sprung up in the post-Flood era. (See Post “The Ice Age” for more information.) 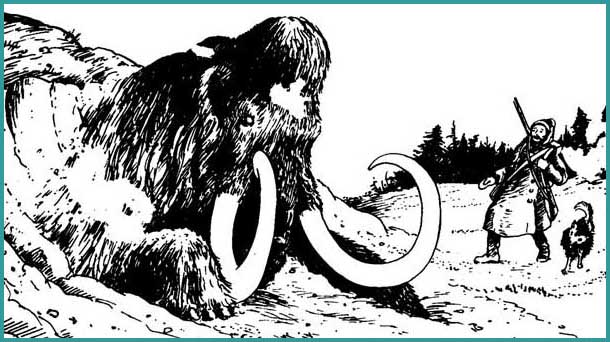 Mammoth elephants have been found in a frozen state in the Siberian tundra. Some were so well preserved that their flesh could be given to explorers’ dogs as “fresh” meat! There is some debate as to what happened to these animals. One theory is that the sudden collapse of the water vapor canopy around the earth was followed by a drastic temperature drop in the earth’s polar regions, causing some animals to end up in this frozen state. A more recent theory proposes that, as the warm waters of the pre-Flood era began to cool down, this brought dry, cold, and windy weather conditions to areas that had experienced a mild climate during the initial post-Flood era. Many animals ended up getting stuck in loess (wind-blown soil), which later turned into “frozen muck” (permafrost). In either case, a knowledge of the Flood and its effects is essential to understanding the mystery of these peculiar frozen carcasses in certain parts of the Earth.

Continued in 3E: Early Migration Before the Rise of Civilization