2-D: Re-Creation of the Earth

To understand better the re-Creation of the earth at the time of the Flood, it should be mentioned that, besides the rainfall coming from above, also the groundwaters from below surged upwards, flooding the earth. In the Genesis Book Scripture quoted in the previous post, we read, “All the fountains of the great deep were broken up, and the windows of heaven were opened.” And in the Quran, “The fountains of the earth gushed forth.” Likely, this meant that, in order to flood the world completely, colossal earth movements worked to disgorge the waters from deep down and spread them over the earth’s surface. The rains by themselves would not have been enough.

It is difficult for us now to understand exactly the geological workings of how all this happened. However, it should be safe to say that if “the fountains of the great deep were broken up”, then there must have been a lot of earthquake and volcanic activity at the time of the Flood.

It is estimated that the amount of underground water deep in the earth’s crust exceeds the amount that exists above ground in the oceans and freshwater sources. That would explain why eruptions of volcanic material consist not just of molten rock, but a full 70% of that material is water apparently. Anyway, all that to say, it seems that much of the water for the Great Flood came from below, not just from above. 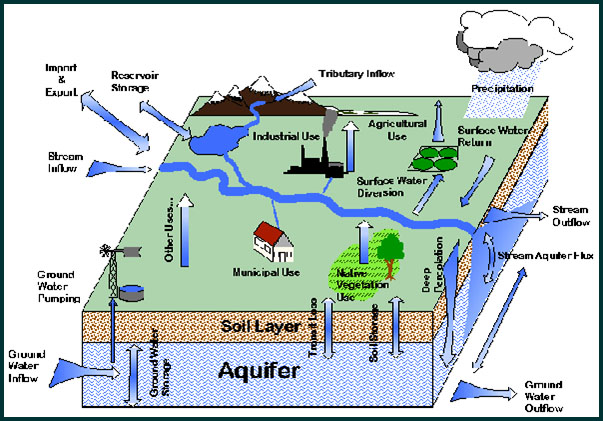 Earthquake activity and consequent volcanic activity, the like of which Earth had never seen before since the Creation, marked these beginning stages of the Flood. However, this was not the end of it. There is much geological evidence to show that, at the end of the Flood or shortly thereafter, the earth’s crust heaved and buckled together under the force of great tectonic pressures.

In order to create some land area, it lay in the domain of the Almighty to deepen the ocean basins in some places and in other places raise them above water level. This would have entailed some colossal uplifts and re-construction of the continental land masses.

Although no one was there to witness exactly what happened, the evidence of this re-Creation process is plain to see. For example, such a grand re-structuring of Earth’s surface would explain why

1)        We have today the broad expanse of the Pacific Ocean bordered by the high mountain ranges of the Andes and Rockies. Geologists always refer to these (and the Himalayas) as “young” mountain ranges. Well, they’re “young” because they were formed after the original Creation at the time of the Flood. The Pacific Ocean also has very deep trenches. It would appear that the Ocean was widened and deepened to allow more space for the Flood waters. At the same time the land surfaces were raised considerably. Scientists may have different theories about how exactly the Almighty went about re-structuring the earth at this time, but one thing is certain: we at least know why it had to be re-structured. 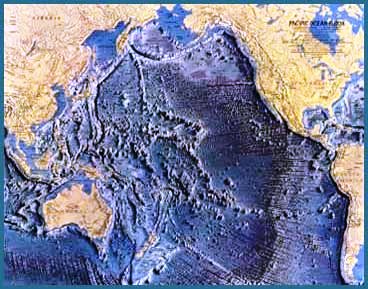 2)        Or why the top 3,000 feet of Mt. Everest is made up of sedimentary rock layers containing all kinds of marine fossils. Before and/or during the Flood, Mt. Everest was just flat surface under the ocean. But then great earth-shaking movements forced the sea bed upwards to create the very high mountain ranges in our world today, such as the Himalayan Mountains… and Mt. Everest. 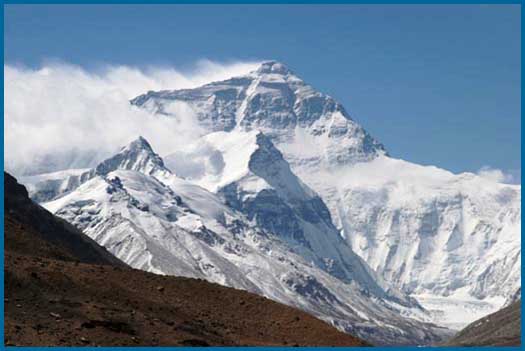 (L) Mount Everest (R) Fossilized Clams Found High Up in the Andes Mountains, Peru. Note that they are closed, something that usually happens because of sudden death and burial; in normal circumstances, clams open up when they die.

3)        All kinds of folded rock formations and mountains exist in the earth, bearing witness to the great tectonic forces that rocked the earth in those early days when the sediments left by the Flood had not yet cemented into solid rock.

Rock formations, such as those pictured above and below, were formed at the end of the Flood, or shortly afterwards, while the rocks were still soft and pliable and capable of forming into a wave-like pattern without shattering. (Such formations bear silent but powerful testimony to the re-formation of the earth’s land surface after the Great Flood.) 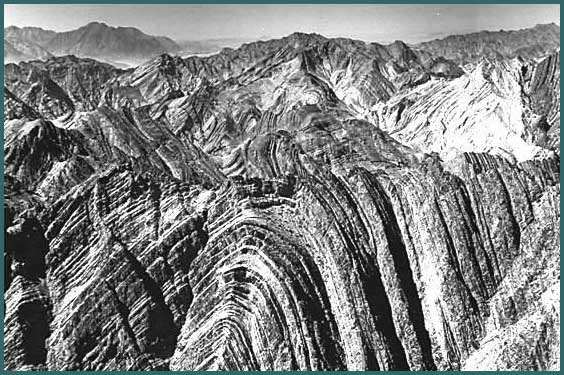 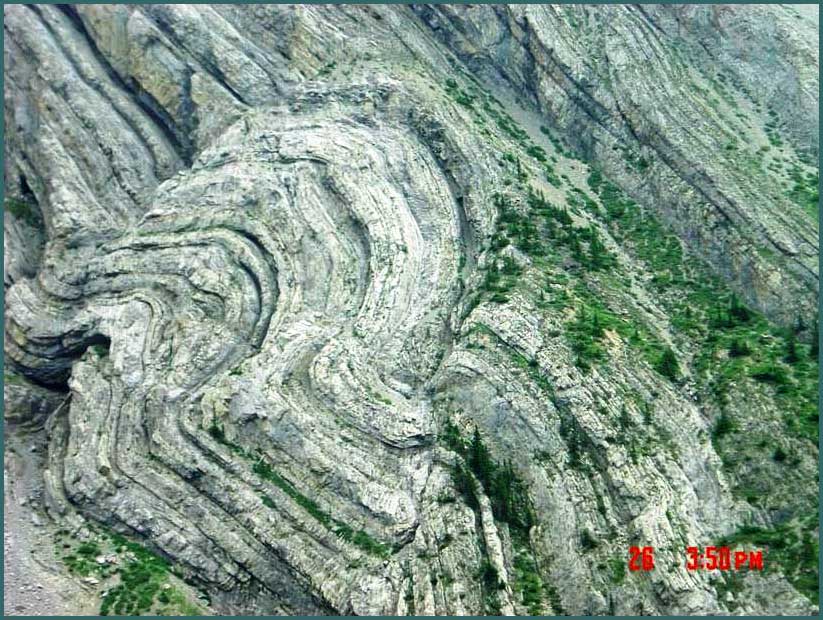 One could imagine that the ground was just soft mud when this “wave” formation happened under the stress of enormous earthquake and tectonic pressures. Notice those green things: those are trees – just to give a sense of perspective as to how huge this formation is and how great were the earthquake forces operating at that time. 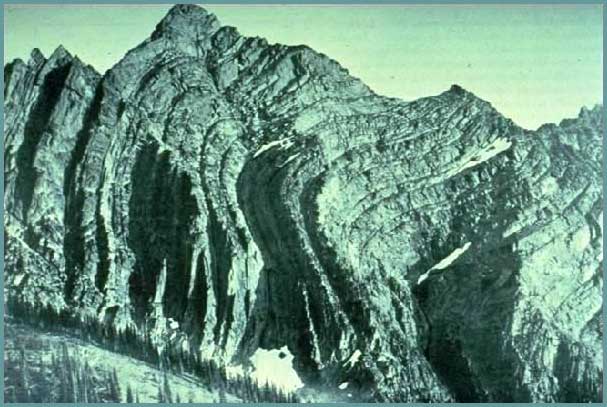 The Book of Psalms contains an interesting passage suggesting that God was hard at work, re-shaping the Earth at this time:

“You clothed the earth with floods of waters covering up the mountains. You spoke, and at the sound of Your shout the water collected into its vast ocean beds, and mountains rose and valleys sank to the levels you decreed. And then You set a boundary for the seas so that they would never again cover the earth.” (Psalm 104:6-9, The Living Bible)

Or in another translation, “You covered it with the deep as with a garment; the waters were standing above the mountains. At Your rebuke they fled, at the sound of Your thunder they hurried away. The mountains rose; the valleys sank down to the place which You established for them. You set a boundary that they may not pass over, so that they will not return to cover the earth.” (Psalm 104:6-9, New American Standard – Updated)

And so it was that the Flood cataclysm, besides covering the earth with water, included also this grand re-structuring of Earth’s surface: great land masses sank to form deeper ocean basins while in other regions the ocean floor beneath the Flood waters rose to form new plateaus and mountain ranges. Earth’s landscape changed completely compared to what it looked like before the Flood. This incredible re-structuring of the environment is well explained in a groundbreaking investigation by scientists Morris and Whitcomb. In their book The Genesis Flood there is a revealing passage about the formation of the Grand Canyon:

“This region occupies some 250,000 square miles, including most of Utah and Arizona, with large segments of Colorado and New Mexico. The Grand Canyon and many other spectacular canyons have been excavated through thousands of feet of these flat-lying sedimentary rocks.

“The remarkable thing is that this entire region has somehow been uplifted from far below sea level, since most of its sediments are of marine origin, to over a mile above sea level, without disturbing the horizontality of the strata or summit levels! … 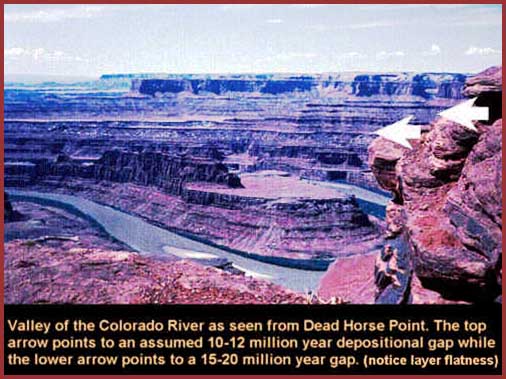 The stratified rock layers in the Grand Canyon are quite clean and clear-cut. The borders between the layers show no signs of erosion (plants growing, water erosion marks) which one would expect to see if they were being formed over long periods of time. The same can be said for most sedimentary rock formations in the earth. They were not laid down by gradual processes but rather, were formed rapidly during the time of the Great Flood

“Although the various theories, all highly speculative and none as yet generally accepted, have been devised in an attempt to account for these phenomena, we merely point out that uniformist [gradual, evolutionary] concepts have apparently proved incapable of providing a satisfactory solution. It seems much more likely that the sediments all were deposited more or less rapidly and continuously, followed by a single great regional uplift. Subsequent rapid canyon downcutting then ensued, while the sediments were still relatively soft and the rivers were carrying much larger discharges.

“Spectacular exposures of flat-lying sedimentary rocks such as in the Grand Canyon provide ample visible evidence of Deluge deposition. In this area, there are thousands of square miles of horizontal strata, thousands of feet thick, supposed to have been deposited over about half a billion years! The strata include limestones, shales, and sandstones. According to uniformist concepts, numerous changes of environment, with great regional subsidences [sinkings] and uplifts, must have been involved, but this would appear quite impossible. The strata simply could not have remained so nearly uniform and horizontal over such great areas and great periods of time, while undergoing such repeated epeirogenic [continent-building] movements. By far the most reasonable way of accounting for them is in terms of relatively rapid deposition out of the sediment-laden water of the Flood. Following the Flood, while the rocks were still comparatively soft and unconsolidated, the great canyons were rapidly scoured out as the waters rushed down from the newly-uplifted peneplains to the newly-enlarged ocean basins.”

(Quoted from The Genesis Flood, pgs 151-152 by Whitcomb and Morris)

The above passage stated, “This entire region has somehow been uplifted from far below sea level.” That inexplicable, unseen force that caused this colossal uplift could only have been the hand of the Almighty. He was the One who set in motion the forces that caused this grand reconstruction of Earth’s surface.

Continued in Part 3: Transition from One Environment to Another

Retrieving Our Lost Heritage (2A)