2-C: And What About Cultural Evidence?

Besides telling us about the original Creation, the Genesis Book goes on to describe for us God’s “re-Creation” of the earth: the story of the Great Flood and Noah’s Ark. From this we can understand why there is no more “water above the expanse”: God caused the water vapor canopy in the upper atmosphere to collapse and, along with the “fountains of the great deep”, inundate the Earth with a great Flood.

Nowadays this well known account from the Genesis Book about the Flood has been relegated into the realm of fable. The strange thing, however, is that there are several versions of this ancient legend existing in the sacred histories of cultures around the world. And they all tell the same story of a Great Flood and a large boat that held the land animals and a small group of human beings:

“The time for the purging of this world is now ripe.
Therefore do I now explain what is good for thee! … Thou shall build a strong massive ark … On that must thou ascend, O great Muni, with the seven Rishis and take with thee all the different seeds … and carefully must thou preserve them therein.” (Mahabharata III.clxxxvi)

It was revealed to Noah:
“… construct an Ark
Under Our eyes and Our
Inspiration …”
At length, behold!
… the fountains of the earth
Gushed forth! We said:
“Embark therein, of each kind
Two, male and female,
And your family…”
So the Ark sailed
With them on the waves
(Towering) like the mountains…
(Sura 11: 36,37,40,42)

“In the six hundredth year of Noah’s life, in the second month, the seventeenth day of the month, on that day all the fountains of the great deep were broken up, and the windows of heaven were opened… The waters increased and lifted up the ark, and it rose high above the earth… And the waters prevailed exceedingly on the earth, and all the high hills under the whole heaven were covered.” (Book of Genesis 7:11, 17, 19)

Evidently, in the minds of Earth’s inhabitants long ago, the legend of the Flood was anything but a fictitious fable; it was common knowledge then, still fresh in their minds in the years after the Flood. As the tribes of man began to migrate into different corners of the world, they brought with them this shared knowledge of their historical origins, a knowledge which still exists in the sacred heritage of many ancient societies in our world today. 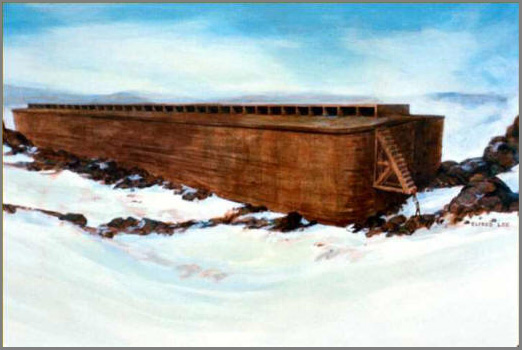 Artist Elfred Lee’s picture based on the description given by George Hagopian who claimed to have seen the Ark in 1902. Other eyewitnesses have confirmed this to be an accurate representation


Conclusion: Going by both the evidence of science and the evidence of culture (mankind’s own records and sacred history), it makes every bit of sense to conclude that a great Flood once inundated the earth. Further ahead, we shall learn how this great cataclysm was the event that shaped and structured the environment we now live in; it set the stage for and became the starting point to our present era of history.

Continued in 2D: Re-Creation of the Earth

UNRAVELING THE MYSTERY OF THE ABOMINATION (11)

WHEN IS THE COMING OF CHRIST AND THE END OF THE AGE? (3)