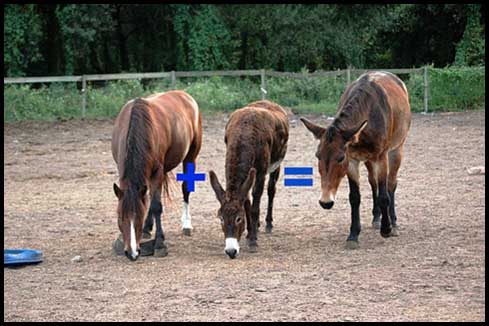 The horse and donkey are two separate, but closely related species. Both belong to the equus genus which includes zebras and ponies. When a horse and donkey breed, their offspring is called a mule. Male and female mules cannot mate and produce offspring; they are sterile. There is a barrier of sterility there that will not allow them to create mule offspring. Sometimes a mule can breed with a horse or donkey and produce another horse or donkey respectively, but mules cannot breed with each other. 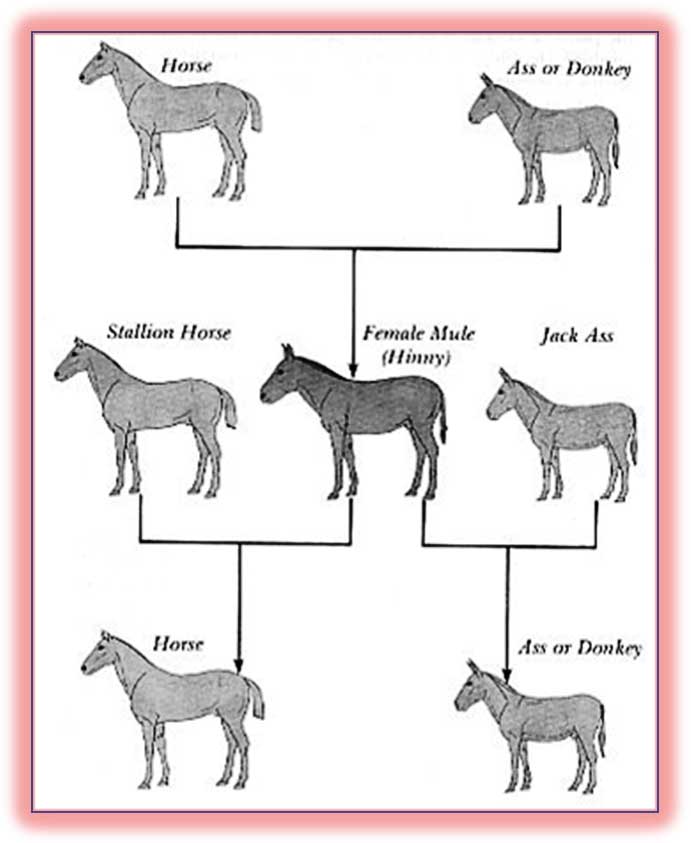 So this barrier of sterility works to some extent between different species of animals that are part of the same genus or family (like the horse and donkey). But for animals of different classes or families, that barrier of sterility between them is complete. And it is good that this is so. What if a cat and a dog could mate and produce a cat-dog? The natural world would become awfully confusing if different species or classes of animals could breed and produce fertile offspring. But God designed it in such a way that each class of plant or animal can only reproduce within the boundaries of its own species or genus. And this maintains order in the natural world.


And, by the same principle, there is a “barrier” that prevents a species from evolving into another more advanced species. And for the same reason: to maintain order in the natural world. That is why God created the plant and animal world to reproduce in such a way that each class of organism could reproduce “after its kind” (meaning within the boundaries of its own species or genus) as a way of preventing confusion in His creation.

This phrase “after its kind” is mentioned no less than ten times in the opening chapter of the Genesis Book (and eight more times in chapters 6-8). God tried to set the record straight right from the beginning – that each plant and creature could only reproduce within the boundaries of its own “kind” or species/genus; but alas, some modern thinkers, having done more thinking than was necessary, it would seem, have come up with their own schemes – in opposition to these opening chapters of the Sacred Book.

Charles Darwin, in his later years, became aware of the lack of real evidence for his speculations about what we might call macro-evolution theory and wrote:

“As by this theory, innumerable transitional forms must have existed. Why do we not find them embedded in the crust of the earth? Why is not all nature in confusion instead of being, as we see them, well defined species?” (Origin of Species, chapter 6)

Although there is (for the purpose of maintaining order in the natural world) a limitation established that prevents different species from breeding together or changing into new species, there is nevertheless, allowance for plenty of variety and adaptability within the genetic boundaries of each class of plant or animal. Genetic variation has allowed, for example, the many different races of mankind to come into being: very small pygmies in Africa, and as we have learned, there have been large-sized giants, but all of them belong to the same genome of humanity. Or the many different breeds of dogs: the Chihuahua and the Great Dane, as different as they appear, both still belong to the canine “family”. 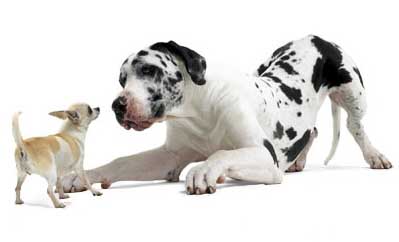 Genetic variation injects variety and adaptability into the natural world, and we could give a name for this – micro-evolution. And for this we can give credit to Charles Darwin who explained micro-evolution in terms of “natural selection” and “diversification of species”. But here also is where he made his mistake. Darwin jumped to conclusions, assuming that the variations he observed in animal species (micro-evolution) was proof that a species could “evolve” into very different and advanced forms – what could be called “macro-evolution”, which, as as we will learn, lacks scientific basis.

Can micro-evolutionary change lead to the formation of more advanced species? 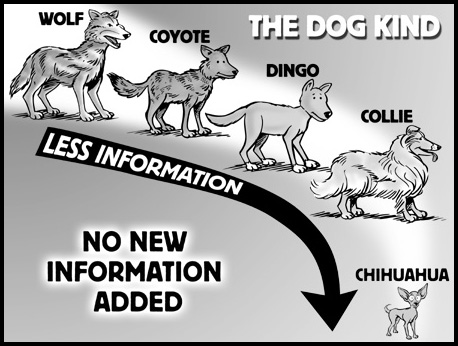 Continue to 4-G: The Problem with Darwinism