Like blueprints for a building, the substance of DNA acts as a code that maps out how our bodily structures will develop as we grow from a tiny cell into a full grown human being. The complex blueprints used in building construction are carefully planned and designed by intelligent architectural designers and draftsmen; they don’t just come together by themselves or by accident. Likewise, the DNA in our bodily cells and genes were the result of the planning and craftsmanship of a Master Builder, our Creator. 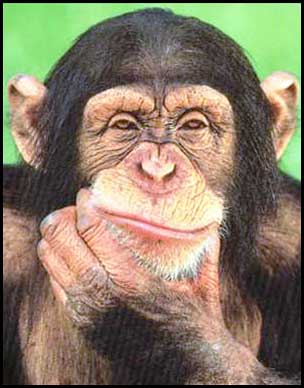 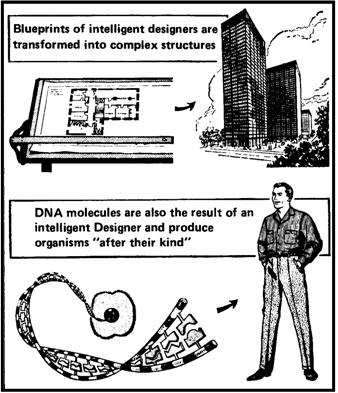 The 1st September 2005 edition of Nature magazine published the results of research done by a group of 67 scientists in the “Chimpanzee Sequencing and Analysis Consortium”. This group of scientists was able to piece together the entire genome (complete set of chromosomes) of the chimpanzee.

The results of this research have revolutionized the scientific understanding of our biological “construction” – with serious implications for evolution theory: 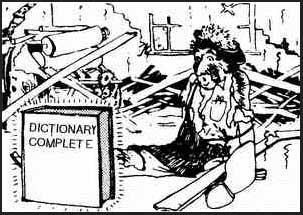 
Now that doesn’t sound very hopeful, does it? That given enough time, we’re going to become extinct. But there is a bright side to this: in a future time, God’s plans call for a regeneration of the natural world to restore the kind of ideal conditions that existed in the world at the beginning of Creation. That, of course, is a matter of faith and can’t be proved by any scientific means. Nevertheless, it does make sense that, if God has love and concern for His creation, which He surely does, then that should be part of His long-term plan: to bring about a grand re-creation or regeneration of the natural world.

And there are a number of references in the Sacred Book that promise this very thing.

“Jesus Christ… whom heaven must receive until the times of restoration of all things, which God has spoken by the mouth of all His holy prophets since the world began.” (Acts 3:21)
“The creation itself also shall be delivered from the bondage of corruption [or “decay”]…” (Romans 8:21)
“For this corruptible must put on incorruption, and this mortal must put on immortality… then shall be brought to pass the saying that is written: Death is swallowed up in victory.” (1Corinthians 15:53-54)

(See Appendix 1 below: The amazing story of a lifelong atheist philosopher converted to belief in God after learning about the incredible intricacies of DNA structures.)

To learn more about the Creation-Evolution question viewed at from the angle of the most recent scientific discoveries, check out the rest of Lee Stroebel’s The Case for a Creator videos at the following URL:

Leading academics, philosophers and members of the Christian faith across the world continue to pay tribute to Antony Flew, the famed British atheist and thinker who discovered God at the end of his life.

The renowned rationalist philosopher died earlier this month at age 87 and continues to be remembered in obituaries and tributes worldwide.

The son of a Methodist minister, Antony Flew spent most of his life denying the existence of God until just six years before his death when he dramatically changed his mind after studying research into genetics and DNA.

“The almost unbelievable complexity of the arrangements which are needed to produce life, show that intelligence must have been involved,” he announced in 2004 and went on to make a video of his conversion called: “Has Science Discovered God.”

Ironically, although modern day atheists such as Richard Dawkins and Christopher Hitchens claim in the rational world of science there is no proof of God exists, it is from the world of science that Antony Flew in his final years discovered “empirical evidence” that God exists, which overturned beliefs he had held for more than 60 years.

Like Einstein before him, Flew found that God was the only possible answer when it came to increasingly complex discoveries from sub atomic particles to the human genome to the very origins of the Cosmos.

“How can a universe of mindless matter produce beings with intrinsic ends, self replication capabilities and ‘coded chemistry’?” he asked, giving this as the main reason for his discovery of God in his final decade.

Flew’s conclusion that there was in fact a God in his 81st year came as a shock to his fellow atheists, particularly Dawkins and Hitchens, two of the world’s most outspoken proponents of atheism.

But Flew refused to back down even when some of his former followers decided his volte-face on God was the result of old age dementia and confusion rather than scholarly research and intellectual rigour.

Flew’s late life change of mind about God’s existence was remarkable because of the huge volume of his writings which until then had embraced the atheist cause. Throughout most of his academic life he was adamant that one should presuppose atheism until there was empirical evidence to the contrary. Then in his final decade as DNA and the human genome began to be understood along with the complexities of life, Flew found evidence which proved to him God exists and is the Creator of life. And from being a rationalist philosopher and non-believer for most of his life, one of the world’s leading thinkers suddenly became a staunch believer.

“The most impressive arguments for God’s existence are those that are supported by recent scientific discoveries,” he said.

In his final years, Flew supported the idea of a God along the lines of the philosophy espoused by Greek philosopher, Aristotle who believed God had characteristics of both power and intelligence.

In 2007, Antony Flew published the manifesto of his conversion, stating unequivocally in the title: “There is a God.”

However until his death while convinced God did exist, he remained skeptical about an afterlife.

With an academic career spanning 60 years with stints at universities across Britain and the US, Antony Flew will be remembered not only as one of the outstanding philosophers of his time, but as the man who preached atheism but died a believer.

UNRAVELING THE MYSTERY OF THE ABOMINATION (2)

UNRAVELING THE MYSTERY OF THE ABOMINATION (5)